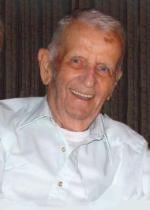 He is preceded in death by his parents and a sister Florence Barkasy.

John served his country in the US Army in WWII. He retired after 28 years as a Firefighter with Engine 5 in Trenton, NJ. He leaves only memories of the man whose selflessness was unequaled. His generosity towards family and friends alike was a small part of his love for others. Accepting no “thank you” for his kindness, his response for all who thanked him was always “Don’t thank me, thank the Lord”

Mass of Christian Burial will be 1:00 PM, Thursday, June 17, 2010 at St. Mark Catholic Church, 1011 Eastwood Road. Inurnment will be in Coastal Carolina Veterans Cemetery at a later date.

In lieu of flowers memorial contributions may be made to Lower Cape Fear Hospice, 1414 Physicians Drive, Wilmington, NC 28401