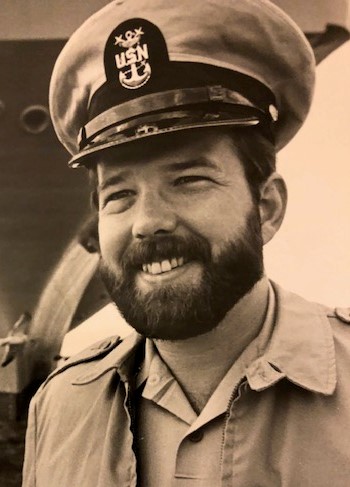 John was born in Harrisburg, PA as the first son of Kathleen (Hess) Giles and John M. Giles, II, who both preceded him in death.

He is survived by his younger brother, Robert E Giles and his wife, Kathleen, in PA and his niece, Rebecca Giles.

After high school, John joined the United States Navy, where he spent 27 years, affording him the opportunity to visit ports all over the world and earn his Associates Degree in Marine Technology in San Diego. He served in Vietnam in the 1970s and in the Mid-East Crisis in the 1980s. He served aboard the USS Canopus, the  USS Eisenhower (aircraft carrier), and helped commission the battleship, the USS New Jersey, when it was brought out of mothballs to serve in the Mid-East.

It was when he was assigned to Recruiting Duty in his hometown of Harrisburg, PA that he met a young pediatric intern, Marianne Felice, MD.  He tried to recruit her into the Navy but she declined.  Instead, he recruited her to be his wife seven years later.  He then scheduled cruises for their vacations so he could show her many of the places he had visited in the Navy.  They completed 16 cruises together.  Clearly, John was a man of the sea.  In San Diego, they purchased a 42 foot ketch sailboat that he named Huahine after their favorite island in Tahiti.

Although John and Marianne were not fortunate enough to have children of their own, John was close to Marianne’s niece, Tammy Felice, who now resides in Los Angeles, CA and their two godsons, Brett and Bryce Sorem, who now reside in Texas and New Jersey respectively with their families.  John was always supportive of Marianne’s career in academic medicine, whether it was in San Diego, CA, Baltimore, MD, or Worcester, MA.  John enjoyed having medical students and pediatric residents to their home and horrified Marianne by telling the younger physicians tall tales about his wife.  He also loved animals, and stray cats and dogs often showed up at their back door where John would care for them, take them to a veterinarian, if necessary, and then convince Marianne to let the little creature stay with them.

After 34 years of marriage, Marianne and John divorced but always remained good friends.

At John’s request, his remains will be cremated; when the pandemic abates, Marianne will scatter his ashes into the oceans and the seas at all his favorite places.