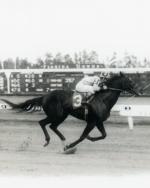 John immigrated to the U. S. when he was 17 to become a Horse Racing Jockey. He retired from racing and settled in Wilmington to become a welder, retiring in 2004. John proudly became a United States Citizen on March 22, 2006.

John was preceded in death by his brother George O’Dell. Surviving are a son, Jerry Ray O’Dell and his mother Joyce; his loving and caring companion, Clara McCrary of the home, one sister, Nina May, brothers, Keith, Donald, and Joe all of Ontario, Canada. John also leaves behind his faithful canine pal, Oscar.

Family and friends will honor John with a memorial service at 2:00 p.m. on Saturday, May 22, 2010 at Wilmington Burial and Cremation Service, 1535 S. 41st Street, Wilmington. The Reverend Joseph P. Newton will officiate the service.

Special thanks and appreciation are attributed to Dr. Testori and the staff at Hanover Medical Specialists as well as to LeeAnn, Michelle, and Adrian of the Lower Cape Fear Hospice & LifeCareCenter. In lieu of flowers, donations may be made to the Lower Cape Fear Hospice & LifeCareCenter at 1406 Physicians Dr. Wilmington, NC 28401.