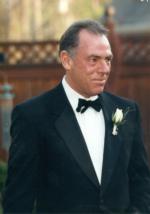 John Patrick Breen after a courageous battle with cancer passed away on September 11, 2010.

He was born May 14, 1947 in Australia and lived all over the world. He lived in Wilmington the past seven years and loved his home here.

He will be missed by all who knew and loved him.

As per his wishes there will be no formal service, but in John’s honor we will raise a glass on Tuesday, September 14, 2010 at Port City Chop House from 5:00 – 7:00PM wearing casual clothes.

Please no flowers! Instead please make a donation to an animal shelter of your choice.

“There is a legend about a bird which sings just once in its life, more sweetly than any other creature on the face of the earth.
From the moment it leaves the nest it searches for a thorn tree, and does not rest until it has found one. Then, singing among the savage branches, it impales itself upon the longest, sharpest spine. And, dying, it rises above its own agony to outcarol the lark and the nightingale. One superlative song, existence the price. But the whole world stills to listen, and God in His heaven smiles. For the best is only bought at the cost of great pain… Or so says the legend.”