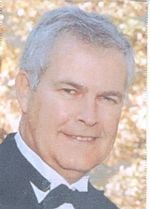 John (Jack) Patrick O’Sullivan passed away Sunday June 1, 2008 at home after a battle with Prostate Cancer.

Born May 17th, 1943 in Brampton, Ontario, Canada to the late James and Gladys Sullivan. Preceded in death by Diane (Smith) of Georgetown, Ont.

Survived by wife Helen ( Reed), sons Michael of Mississauga and Shawn and his wife Laurel of Rockhill SC and daughters Cindy of Montgomery, IL and Janie and husband Scott Mackay of Oshawa, Ont., four grandsons, Steven and Mark Mackay and Aiden and Jack O’Sullivan. Also survived by three brothers, Denis, James and George and sister’s Mary McLeod and Darlene of Brampton and Cheryl Baker of Lake Wylie SC.

John worked for over 17 years for Northern Telecom before moving to Riyadh Saudi Arabia to work for BTC, After six years he moved back to USA and worked for Tellabs International where he took an assignment in Cyprus and Dubai to head Middle East Sales office. After 6 years he returned to Naperville IL to head up South American Sales office.

Thanks go out to Oncology Dept of Hanover Medical and the nurses of Lower Cape Fear Hospice.

In lieu of flowers please send donations to Cancer Fund. His family will receive friends on Thurs June 5th from2-4 and 7-9 at Jones and Sons Funeral Home at 11582 Trafalgar Rd, Georgetown Ont. Funeral services will be held at Holy Cross Church, Georgetown Fri June 6th at 10am