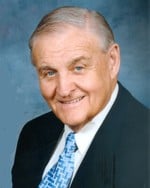 After 76 wonderful years loving his family, serving his country, and inspiring a multitude of students whom he taught and loved, John passed away peacefully on Sunday at the Lower Cape Fear Hospice & LifeCareCenter in Wilmington, North Carolina. John was born in Statesville, North Carolina. He graduated from Lee Edwards High School in 1951 and immediately entered the United States Marine Corps serving as a Staff Sergeant in Korea and also in the Reserves. John entered Mars Hill College receiving degrees in Business and Music. He taught band at Mars Hill High School and Marshall High School before moving to Morehead High School. Later he spent a year teaching music at Lee Edwards High School before moving to his home at Enka High School and Middle School where he was a beloved band director from 1967 until 1995. He also taught at South Brunswick Middle School and Myrtle Grove Middle School in Wilmington.

While at Enka High School, John led a multitude of award winning bands, and created the Land of the Sky Marching Band Festival. Later, he founded the Land of the Sky Symphonic Band in Asheville, North Carolina. John was the first recipient of the Western North Carolina Bandmasters Award of Excellence and also received the Outstanding Alumni Award from Mars Hill College. He taught Sunday School at Weaverville United Methodist Church in Weaverville, North Carolina and later at Ocean View United Methodist Churchon Oak Island, North Carolina. Over the years he faithfully performed Taps for numerous military services in Western North Carolina and throughout Brunswick County. John loved listening to music, playing his trumpet, gardening, and being with his family. He was blessed to have over 44 years to share his unending passion for music with his dedicated students. He was an amazing son, husband, father, brother and friend who touched the lives of everyone with his pure heart, beautiful blue eyes, generosity and genuine kindness for all.