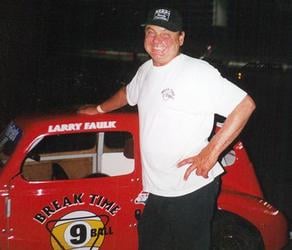 John “Steve” Faulk, age 65, of Wilmington passed away Wednesday, November 26, 2014 after a courageous battle with Amyloidosis.

He was born October 20, 1949 in Wilmington North Carolina the son of John William Faulk and the late Thelma Harker Miller.

Steve was an avid and dedicated fan, historian, and wealth of trivia knowledge when it came to the sport of car racing. He enjoyed spending time at the races in Daytona, playing pool,painting, spending time on the water oystering and claming or driving Legends cars. Steve was a devoted and loving family man who was happiest when he had family surrounding him, especially his grandson who lovingly referred to him as his soul mate.

A special thanks from the family to Lisa Faulk for her compassionate care and support for Steve throughout his illness.

In lieu of flowers, memorials may be made to the Lower Cape Fear Hospice Foundation, 1414 Physicians Drive, Wilmington, NC 28401.