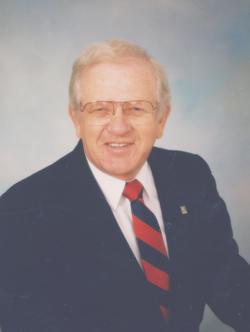 On June 2, 2015, my husband and best friend, John Wilson Permenter, Jr. passed away from this earth to a better place after a brief battle with acute leukemia. As much as we all love and will miss John, I don’t think there is a one of us who would wish him back from heaven. And now, may I tell you the life story of my beloved?

John was born in Pittsboro, N.C. on January 12, 1933, the oldest child of Juanita Clark Permenter and John W. Permenter, Sr. His lifetime of four score and 2 years here on earth was filled with God’s bountiful blessings, and because he is a Christian, he is alive today in Paradise with his Lord and Savior, Jesus Christ.
John grew up in a loving family with his younger brother, Donald, and his adoring sister, Betsy. Early in his childhood he lived, played, fished, hunted, and swam in the creeks around Middle Sound and Ogden. John’s love of the water and of nature afforded him many hours of leisure and pleasure. He explored the Carolina coast and frequented all of the lighthouses of North Carolina. John was an expert boatman with a passion for cruising up and down the coastal rivers, sounds, inlets and ocean waterways.

As a young man, John met and married his childhood sweetheart, Marilyn Cooper Permenter, and they lived happily together for 58 years until Marilyn passed in 2009. From that union came a beloved son, John W. Permenter III, who faithfully telephoned every day just to say “I love you, Dad,” and John would always respond with, “I love you, too, my son, and I am proud of you!”

John began a long, satisfying career with Southern Bell Telephone and Telegraph Company in 1951, until he was drafted into the Army during the Korean Conflict. Most of his military time was spent in Germany, and during this time, he and Marilyn traveled extensively during their stay abroad. After that, John returned to Southern Bell, finished his college studies and
completed 34 years with the company, retiring as senior engineer. Upon retirement, John received a letter of commendation from Bell South bestowing upon him the highest honor that could be extended to a telephone employee for years of exemplary service and dedication to the company.

After retirement from Bell South, John pursued a career in real estate. His love of people and serving them gave him an opportunity to work with Landmark Realty, helping to oversee the development of The South of Woodbury. John had a strong work ethic, and in everything he did, he was committed to excellence and honesty. One particular year with Landmark, he
received 5 out of 7 awards for outstanding service with the company. He served as a chaplain for the Wilmington Board of Realtors, and as a director, supervised the first renovation of the Hospitality House of Wilmington. For this he was honored with a state citizenship award for outstanding service to the community. After that, John established his own appraisal company, Permenter and Company, and worked with real estate appraisals as well as sales.

An avid reader, John spent a good bit of his time devouring the latest best sellers and his many “how to” magazines and books, researching how to make things and repair broken things for himself, his family, friends and neighbors. He was a “tool-aholic”, and with his engineering brain, he invented many gadgets to help him get a difficult job done. Around the neighborhood, he was known by the children as Mr. John, or Papa John, the “fix -it man”.

During his sunset years, John married a longtime loving friend, Morris Elizabeth Jackson, whom he affectionately called “Marci”. They spent their few short years together, basking in each other’s company, sharing their deepest thoughts and prayers, enjoying lingering conversations, entertaining family, friends and neighbors, concocting recipes in the kitchen, remodeling their house, working in their flower gardens, and traveling in their Winnebago.

John was a keen observer of nature and took time to observe and study animal habitats, intricate patterns in spider webs, detailed field markings of birds in his big back yard, glowing sunsets and interesting cloud formations. He chose to live a simple life close to nature and taught Marci that it was important to stop and smell the roses all along the way. John and Marci made many special memories, walking hand in hand, just observing God’s awesome creations.

John deeply valued his friendships in all walks of life. His gentle spirit and soft-spoken voice made it easy for him to make and keep long-lasting friendships. He had many friends as a 32nd degree Mason, belonging to St. John’s Wilmington Lodge #1. He was a member of the Wilmington Jaycees and served on the Board of Directors the year they became #1 in the state. John especially appreciated his Christian brothers in Emmaus and their bonded relationships over the past 25 years. He always looked forward to their every Wednesday morning prayer breakfast that has been meeting at the K &W Cafeteria for 19 years. John also had many dear friends that he taught and mentored in Bible Study Fellowship. A great blessing in John and Marci’s life was their spiritual family of brothers and sisters in the Seekers Class at Wesley Memorial where they enjoyed studying together the Word and helping teach the class.

Among John’s many attributes was his sincere humility and deep sense of gratitude for every favor or act of kindness ever shown to him. Marci used to get annoyed for all the dozens and dozens of times in a day that he would say “thank you” to her and to his faithful Schnauzer, Gigi. John’s kindness and impeccable manners distinguished him as a true southern gentleman.

Lastly, John was a tither and a praying man, and part of his daily prayer was always, “Dear Lord, use me as your instrument.” God granted that request again and again in John’s life for God gave John what he asked for – a servant’s heart. One of John’s greatest pleasures was to do for others, and in doing so, he fulfilled the great commandment “Love your neighbor as you love yourself.” To God be the glory for the things He has done and will continue to do in John’s life!

A service will be held at Wesley Memorial United Methodist Church (the pumpkin church on South College Road) at 11:00 on Saturday with a visitation in the Church Gathering Hall one hour prior to the service. Officiating will be Reverend Beth Hood and Reverend William M. Wooten, a dearly beloved brother in Christ.

Special thanks to our Hospice angel of mercy, Beth Burgess, and to our family, friends, and neighbors whose cards, food, visits and prayers sustained us during one of the most difficult times in our lives. Memorials may be made in John’s memory to Lower Cape Fear Hospice, the music ministry at Wesley Memorial, or to the charity of one’s choice.