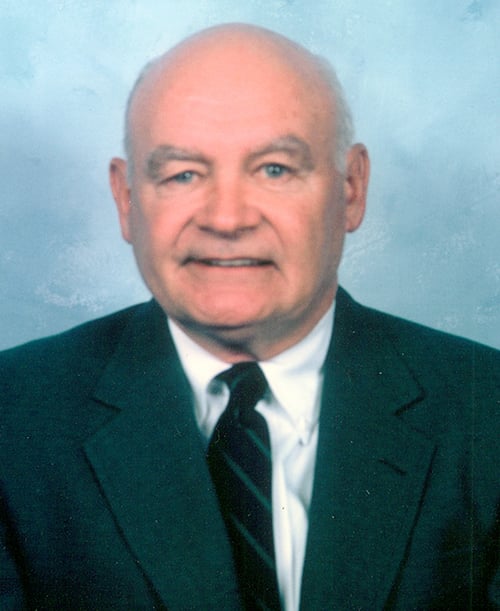 The Burial and Rite of Committal with Military Honors will follow the service at Oleander Memorial Gardens at 306 Bradley Drive, Wilmington, NC 28409. Family and friends are invited to join the family immediately following the service for a light lunch at the Hanover Seaside Club at 601 S. Lumina Avenue, Wrightsville Beach, NC 28480.

Joe was born in New York City, NY, the son of the late Joseph Michael Corcoran, an Irish Immigrant, and Mary Duffy Corcoran. He was preceded in death by his beloved wife, Julia Awtry Corcoran who he met at the USO in Portsmouth, Virginia. He also was preceded in death by a sister, Mary Corcoran LaVista. He is survived by five devoted children; T. Jefferson Comer of Onaga, Kansas and his wife, Jan, Lynda Comer Walker and her husband Chuck of Wilmington, J. Michael Corcoran of New Bern and his wife, Janet, Mary Evelyn Corcoran of Wilmington and Patricia Corcoran Smith and her husband Lou, of Wilmington. He was the proud grandfather of eleven grandchildren; Katie Comer King (Adam), Mickey Comer, Dr. Clay Walker (Liz), Julie Walker Bradham, Joey Walker (Susan) Nancy Corcoran Thuringer (Jason), Mary Corcoran Keeter, Alice Corcoran Culpepper, Melissa Raymer, Erin Sabrinsky Strickler (Nathan) and Marlo Sabrinsky (Odlanyer Perez Loyola). He has twelve great-grandchildren. He also leaves behind precious nieces, nephews, cousins and friends who treasured him.

Joe was an excellent student and attended Chaminade, a parochial school, on Long Island and graduated as Valedictorian of his class in 1943. By October of that year he had answered his country’s call and joined the United States Marine Corps and was assigned to Parris Island. He trained extensively as an Airborne Radar Technician and Radar Operator during WW II. He served honorably until his discharge as Corporal in 1946. He attended Wright Junior College, Grove City College, Corpus Christi, Adelphi University, New York University and William and Mary University.

Joe worked for the A&P Grocery Store while raising his young family in Portsmouth, Virginia and moved his family to Wilmington in 1961 to work for J.W. Jackson Beverage Company (Pepsi-Cola). He retired from Anheuser-Busch after a 31 year distinguished career in 1993 where he served as District Manager in both the South-Eastern and Western regions of North Carolina. His Budweiser distributors were well known for receiving “Dimensions of Excellence” under his guidance and diligent work. Many friends were made along his illustrious career.

Joe was a member of All Saints Catholic Church, a 50 year member of The American Legion and a long time member of the Hanover Seaside Club, The Marine Corps League, The Chaminade Alumni Association and the World War II Museum. His love for giving to charities and organizations in need was his hallmark. Joe was an avid golfer and loved the game of golf.
He is known for his love of nature and for all of God’s creatures; especially dogs and birds.

The family wishes to sincerely thank all of the loving hands who cared for our Joe. Memorials may be given to the newly established ” Corcoran Family Champions of Freedom Scholarship” to aide returning Veterans at UNCW University Advancement at 601 S. College Road, Wilmington, NC 28403.

Share memories and condolences with the family at wilmingtoncares.com.