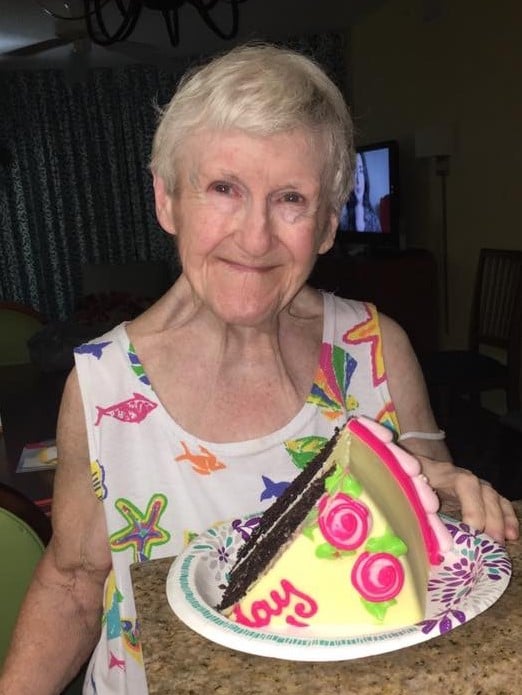 Judith Marie Lynch, 81 of Currie, NC has left to be with the Lord peacefully at home. Judith is preceded in death by one of her daughters Susan Juanita Lysaght. Her three daughters Lori Kennedy and husband Daniel of Alabama, Holly Marie Lysaght, Rebecka Leigh Lysaght and 10 grandchildren of Southport NC. She has two remaining daughters Kathryn Strickland and husband Lloyd of Currie, NC. Also, Cecel Margaret Martin and husband Tom of Collinwood, TN.

Judy was born in Niagara Falls, NY. She moved to Huntsville, AL. Where she worked as a logistic data management technician with civil service at Redstone Arsenal for 21 years. During this time, she was a proud active member of the American Legion in Huntsville. Where she made lasting special friends that she held daily to her heart.

Judith has a beautiful kaleidoscope personality that could blind anyone. Whether it is dressing up with her funny sunglasses or costumes for get togethers. To being able to share lunch and talk or color for several hours with her special friend Kyleigh Eason. She spent several summers at Camp Clear Water where she made beloved memories with her family. Judith became a treasured person to people at the lake and was beloved known to all as Nanny.

Judith had several grandchildren she shared a special relationship. Joseph Martin of Raleigh, NC with his wife Lauren. Daniel Lloyd Strickland and his love Alexis. Jessica Marie Strickland both of Currie, NC. She also had one adopted grandson Evan Ramos of Atkinson, NC.

Once Judith retired, she moved in with her daughter Kathryn in Currie. Where she became a prominent influence for raising Daniel and Jessica. The kids would often make fun of her quirky personality. She was very proud of their accomplishments, like Daniel being named VIP Male Athlete of the year 2009-2010. His becoming a Fireman and his promotions. Nanny would love to cheer Jessica on during her many years of cheer and playing basketball for school. She was Jessica’s confidant for everything. She also took pride in Daniels unselfish help the many years she was downstairs.

Judith will be greatly missed by family and friends. She has made a lasting impression on many people’s lives.

Please share memories and condolences with the family by clicking on the ” Post a Condolence” tab below or by sending condolences to the family via Kathryn Strickland 203  Riverland Drive, Currie NC 28435.