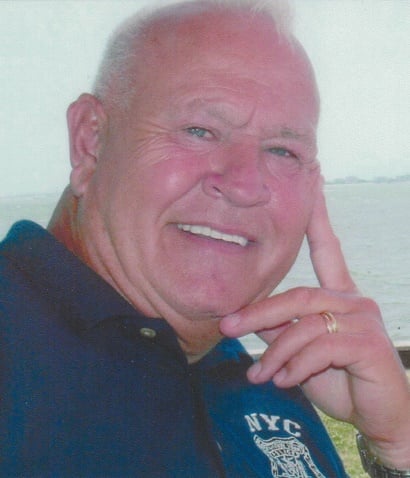 He was born in Greenpoint, Brooklyn, NY on September 14, 1942 the son of Bruno and Anna Lenio Westfall and grew up in Forest Hills, Queens, NY.

He joined the NYPD in 1965 and was later promoted to Detective assigned to the Intelligence Division. Wes had a very interesting career investigating organized crime and other subversive groups as well as guarding dignitaries visiting New York City i.e. US Presidents, foreign heads of state including Imelda Marcos and Pope John Paul. He could tell you some stories about his experiences.

He and his wife Jeanne moved to North Carolina in August 2006. Wes could be found shopping at Walmart, Costco, Home Goods, Hobby Lobby to name just a few. He always had his service dog, first Lady Girl and then Kaylee, beside him wherever he went.

Wes especially loved planning vacations, parties and events for family, friends and neighbors. Wes lived every day by the advice given to him by his first sergeant – “make the most of your post”. On March 12, 2019 God decided Wes had “made the most of his post” and now he is safely home in Heaven.

Wes served his country with honor and distinction in the United States Army.

A presentation of Military Honors will be rendered in recognition of Wes’s honorable and faithful service to his country.