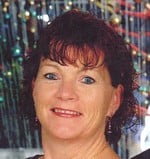 Katherine Mary (Dillon) Carr passed away May 28, 2009 after a long and very courageous battle with cancer. She was 46 years old.

A woman known to have several nicknames, she was affectionately known to her parents as Katherine Mary, her husband knew her as Kate, her siblings, nieces and nephews called her Katie Mae, lifelong friends knew her as Kathy or “Pickles”. Her children simply called her Mom.

Born in Verdun, France on May 27, 1963 Katherine Mary entered the world with sparkling blue eyes, a warm smile and a pure heart which became her trademark. When she passed recently she continued to have a sparkle in her eyes even after her lengthy battle.

Katie Mae was raised in the small town of Mansfield, MA where she graduated from high school in 1981. While in high school she became a member of the Marching Band where she became lifelong friends with many of the other band mates. Her adventurous spirit took her to the city of London, England where she lived for several years. Upon returning to the States she chose to settle in Wilmington, NC a place she has called home ever since.

Katie Mae worked for Lower Cape Fear Hospice for many years before being diagnosed with cancer. She recognized the challenges she would face and looked at them head on, never backing down and always keeping a positive attitude.

Although she had many favorite activities her true favorite was visiting New England with her husband and children during the fall months thus allowing her family to experience the crisp fall air, colorful foliage, the love of family and of course the annual family trip to the Big Apple.

In the true spirit of her Irish heritage her family and friends were second to none and were by far the most important aspect of her life. She leaves behind a family that has been blessed by her presence, honored by her commitment and awestruck by her courage. At her passing she leaves her beloved husband Terry Carr of Wilmington, NC, her sons Justin Berard of Attleboro, MA, Adam & Kyle Peppard and step daughter Ashley Carr of Wilmington, NC, her loving parents Raymond and Virginia Hayes of Wilmington, NC, Mother-in-law and father-in-law Ida and Gene Harris, sisters Terry Eldridge & husband Bob of Wilmington, NC, Ann Marie Lorenz & husband Dave of Hampstead, NC, Colleen Turcotte & husband Dave of North Attleboro, MA, Courtney Zahner & husband Paul of North Attleboro, MA, her brothers Keith Hayes & wife Marsha of Mansfield, MA, Kevin Hayes & wife Anne of Mansfield, MA, John Dillon of Foxboro, MA and Patrick Dillon and wife Lori of Falmouth, MA., Sisters-in-law-Trina, Teresa, Tonia, Brother-in-law-Tony. In addition she leaves her many cherished nieces and nephews and her new grand-nephew, her many aunts and uncles and in the true Irish tradition a “clan” of cousins and friends.

Katherine Mary Carr – we will honor your legacy, cherish your memory and we will never forget your sparkling blue eyes and warm smile…Rest in Peace.

Please no flowers, memorial contributions may be made in memory of Katie to your favorite charity.

Online condolences may be made to www.wilmingtonburialandcremation.com