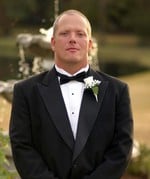 Kelly was born in Wilmington, NC on March 1, 1975, the son of Ray and Phyllis Batchelor.

Surviving is his wife Angel Batchelor of Wilmington, NC and his two beautiful daughters (from a previous marriage) that he loved very much, Kimberly and Katelyn Batchelor, his brother Kevin Batchelor and wife Mindy, Maternal grandparents Derwood and Magalee Perry of Wilmington two nieces Ashley and Megan Batchelor of Rocky Point, NC. Kelly is also survived by his two step children with his current wife, and step son, Justin Picarella of Hampstead, NC from a previous marriage. There are many life long friends that he loved very much.

Kelly was an electrician by trade and had been for approximately 15 years.

Memorial service will be held on Wednesday, November 19, 2008 also at Wesley Memorial United Methodist at 2:00pm.