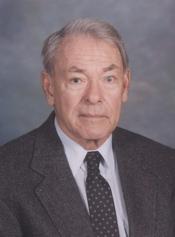 Born in Cumberland, MD August 12, 1926, son of the late Russell A. Price and Helen Chappell Price. He is predeceased by daughter Laura Nichols and step-daughter Jill Gouse.

Ken served in the U.S. Navy in WWII aboard naval ships as a Seaman First Class/Radio Operator. He was honorably retired from active duty in 1946 and then from the U.S. Naval Reserve in 1950. A memorial plaque in his honor will be located at the Coastal Carolina Vet Cemetery in Jacksonville, NC.

A graduate from the University of Maryland with a B.S., M.S. and Ph.D. in Microbiology he began his career with Charles Pfizer and Co. in 1954. He moved on to a twenty-five year career with Bristol-Myers Squibb in Syracuse.

Ken served as Director of Anti-Infective Preclinical Research where his responsibilities were to provide leadership and scientific direction needed to maintain a creative and productive R&D effort in the area of new anti-infective agents. He was responsible for the activities of scientists in Canada and France and served as scientific liaison to the 100-plus scientists working at the Bristol-Myers Squibb Research Institute in Tokyo, Japan. Additionally, he was credited with over 100 publications on anti-infective agents, specifically antibiotics, including ten solicited chapters on anti-infective drugs.

Ken and Carol married in 1979, lived in Syracuse, NY until Ken retired in 1985 and they moved to Wilmington, NC. They loved to travel the world and were certified SCUBA divers for over 26 years. Other hobbies included skiing, tennis, genealogy and he co-authored a publication accepted by the American Genealogical Society with his wife.

Ken also served as President of his neighborhood HOA , volunteered throughout the neighborhood in various capacities. In earlier years, he enjoyed clamming and oystering. All his life he was an avid sports fan, in particular lacrosse as well as a season ticket holder to UNCW Seahawks.

A memorial service will be held 11 AM Saturday, September 8, 2012 at Wilmington Funeral Chapel.