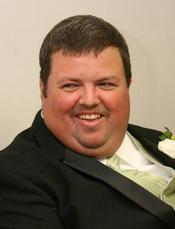 A memorial service will be held at 3pm on Sunday July 28th, 2013 at the USS North Carolina Battleship auditorium to remember and celebrate his life.

Born November 16, 1973 in Charleston SC, Kevin attended his freshman year of high school at Hoggard in Wilmington NC where he played soccer for the Vikings. He completed his final three years at Roswell (GA) High School, graduating in 1993. While there, he won batboy of the year three times. Since returning to Wilmington in 2001, Kevin had volunteered his time and service expecting nothing in return.
Kevin had a true deep passion for baseball and was the volunteer equipment manager for “The Sharks” for 11 years. He also loved all things Naval which was inspired by his Dad’s Navy experience aboard the USS Grant during the Vietnam War era. . Kevin was a member of the Tin Can Sailors Association and a volunteer with the USS North Carolina battleship’s Living History Crew in Wilmington NC.

Employed with the “Slice of Life” pizzeria in downtown Wilmington, Kevin never learned to drive but was fiercely independent, always on the move and on time. He loved to ride the Wilmington buses which helped him maintain his independence and his interests. He knew the bus routes and schedule by heart. He made great contributions of service and kindness from his heart during his brief time with us and will be missed dearly by those who were honored to know him.

In lieu of flowers memorial donations may be made to a memorial fund, in Kevin’s honor in care of his brother, Matthew Cerasoulo, 148-C Silverspring Place, Mooresville, NC 28117.