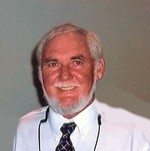 Knox Herndon, of Wilmington died on Monday, September 15th, 2008 after a courageous struggle with cancer. He was born in Robeson County on September 23rd, 1944 to the late Robert and Nola Gray Herndon. He was preceded in death by five brothers and three sisters.

He is survived by his wife of 44 years, Nancy Ward Herndon, son Chris and his wife Sandy, daughter Donna Dansby and her husband Corny, son David and grandsons Austin and Hunter Godwin, Caleb, Kai and Eli Herndon, and Mother-in-Law, Mary Ward, all of Wilmington, and brother David Herndon, his wife June and their family, of Chapin, SC.

He volunteered and served bravely in the Army and was a Vietnam Veteran. He retired from Bellsouth in 1996 with 30 years of service. An avid outdoorsman who loved to fish and hunt, he was happiest when on the water with his grandsons.

He lovingly referred to his grandchildren as “Granddaddy’s Hearts.” He will be remembered as a loving husband, father, granddaddy, brother and friend to all who knew him. His children and grandchildren will carry memories throughout their lives of their Daddy and Granddaddy watching on as they played sports, fished, and played on the beach and know that he will watch over them and guide them as they grow and try to follow the example that he set out for them.

A celebration of his life, officiated by Dr. Don Cashwell, will be held at Ogden Baptist Church on Wednesday, September 17th at 2:00pm. A time for visitation with the family will be held immediately following the service in the fellowship hall.

In lieu of flowers, the family request that donations be made to the Alzheimer’s Research Center, American Cancer Society and/or the Lower Cape Fear Hospice, 2222 S 17th Street, Wilmington, NC 28401.