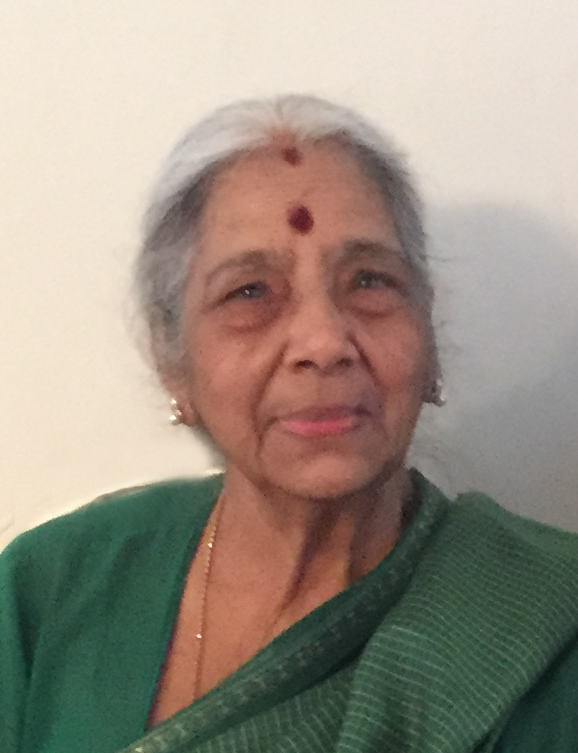 It is with a very heavy heart that I inform you of the passing of our mother/mother-in-law, Lakshmi K. Moorthy, affectionately known as Lakshmi Manni to most people, born May 7, 1933 in Mumbai (Bombay), India. She passed away peacefully on April 23, 2021 at approximately 5:25 pm after brief but heroic battle with lymphoma. She epitomized the meaning of the word wife, mother, mother-in-law, grandmother, sister, and aunt; her caretaking and mothering instinct allowed her to be an adoptive “mom” to many people in her life. Her passion was reading, yoga, naturopathic remedies, being knowledgeable on many topics, and sharing her advice/words of wisdom. She was always an animal lover, and had a deep fondness for their family dog, Frido, and her granddog, Chutney. She was truly a formidable woman who accomplished many things in her life, but to her, family always came first!

She was the daughter of Kuppaswamy and Parvathi Iyer, and grew up in Mumbai (Bombay) with her two younger brothers, Ambi and Krishna (Kitcha) Iyer, and she was the older and wiser sister throughout their lives. She attended college and graduate school at Bombay University. For her generation, she was a trendsetter, and achieved her Master of Arts in Economics and worked as an Income Tax Officer in Mumbai (Bombay) for several years until her marriage. Soon after meeting our father/father-in-law, Venketraman (V.K.) Moorthy, clandestinely and dating on the local train, they decided to marry on July 3, 1959, at which time, our mother/mother-in-law gave up her career to dedicate her life to their family. With the promise of a good life, and financial security, they moved to a cozy home in Kalina, a suburb of Bombay. Within the first year of their marriage, in May 1960, they welcomed their precious daughter, and apple of their eye, Janaki (Jana). After living in Kalina for a few years, they moved to Chembur, and lived in a ground floor duplex, and the building was named Jai. Once they welcomed their cherub of a son in November of 1962, they struggled to find a name, and conveniently named him Jai after that building. Our mother/mother-in-law was family-oriented first and foremost, and took care of her younger brother-in-law, Viswesh, her brother, Krishna, who both lived with them for many years, and her younger sister-in-law’s, Vallibai and Kalyani, when they came home for their deliveries. Following many joyous years raising their children, Jana and Jai, in their Chembur home filled with siblings, cousins, and extended family, they briefly moved to Calcutta before returning to South Bombay in 1976. After Jai and Jana completed college, they moved to her husband’s first overseas posting in Hong Kong. They lived in Hong Kong, and Singapore through the 1990’s, and eventually emigrated to the United States in 1998 with the sole purpose of being close to their children and grandchildren. They lived in Massachusetts with Jana and her husband, Dilip, but eventually moved to New Jersey and settled in next door to their son and daughter-in-law, Jai and Prema, in the sleepy town of Mahwah, for approximately 17 years. At the end of 2020, she moved to Wilmington, North Carolina to live with Jana and Dilip in their new retirement home. She was married to her husband for 59 years, and she remained his diligent caretaker for the last few years prior to his death in October of 2018.

She was a woman who could be described as the pinnacle of feminine power. She balanced both modern thinking with the best of our Hindu culture and traditions. She was highly educated, read voraciously and was knowledgeable on a variety of topics. She embodied the Hindu saying, “Atithi Devo Bhava, a Sanskrit verse, which means “The guest is equivalent to God”. Her hospitality and giving nature were her signature traits. She has hosted thousands of people at her home, had a knack for putting everyone she met at ease, and people truly looked forward to spending time with her while she made her famous “cup of tea” for them. She was a wonderful cook, and enjoyed making “dosa’s and poori/bhaji’s” for her four grandchildren and their friends. Her commitment to family was the over-arching theme of her life, beginning from taking care of her parents, her brothers, and her husband’s siblings to helping to care for her grandchildren, Vivek, Varun, Vinay and Riya. She always put her needs to the side for others, especially for her family. She provided childcare to all her grandchildren for the first two years of their lives, and maintained a close relationship to each of them as they grew into young adults. She was truly loved by all and will be dearly missed by all those who knew her. At the very end, she was surrounded by her immediate and close family.

She is survived by her two children, Jana and Jai, Dilip, her son-in-law, and Prema, her daughter in-law, her grandchildren Vivek, Varun, Vinay, Riya, and her granddog, Chutney. She has one surviving sister-in-law, Kalyani, and her husband, N.S. Sharma & one brother-in-law, Viswesh, and his wife, Lalitha. She now joins her husband, V.K. Moorthy, her parents, Kuppaswamy and Parvathi Iyer, her brothers, Ambi and Krishna (Kitcha) Iyer, and her sister-in-law and brother-in-law, Vallibai, and V. Mahadevan.

May her loving soul rest in peace.