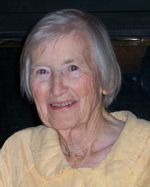 She was born June 12, 1919, on a farm in Sampson County near Faison, NC, to the late Edwin and Laura Mitchell Oates. She was one of 11 children and the first in her family to graduate from college, from East Carolina Teachers’ College. She taught school for several years before marrying Philip C. Smith Jr., a U.S. Naval officer from Akron, OH, in 1951. They lived in Florida, Maine, Ohio, Hawaii, and Bermuda before settling in Wilmington in 1969. She was a loving wife, a great mom, and very devoted to her family.

Inurnment will be held at the U.S. Naval Academy Columbarium in Annapolis, Md.