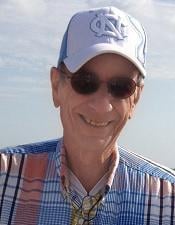 Lewis Frederick Jones, Jr. (Freddie) passed away at the age of 63 on Thursday December 19th, 2013 at home surrounded by his family after a long battle with cancer. He is survived by his wife Rhonda Ross Jones and his son Lewis Frederick Jones, III (Erick). He also has cousins living in Alabama and Virginia. His extended Ross family live in Wilmington and Leland, North Carolina and New Castle, Delaware. He is loved by all.

Lewis was born in Henderson, NC on March 28th, 1950. He was preceded in death by his parents Lewis Frederick Jones, Sr. (Fred) and Elaine Bowers Jones.

Lewis was a 1973 graduate of UNC Chapel Hill, majoring in Urban Planning and Geography. He loved his Tar Heels. He started working with J. A. Jones in 1968 during summer breaks. His dad was a concrete superintendent and cut him no slack. Lewis worked his way up the industry ladder, taking positions as a laborer digging ditches, in the payroll department, surveyor, field engineer, office engineer, project engineer, civil superintendent, area superintendent, project superintendent, and project manager. He wore multiple hats across various subsidiaries of J. A. Jones including Metric Constructors, Lockwood Greene Engineers, and CH2M Hill, giving him endless knowledge and experience for his projects. He retired while at CH2M Hill. He loved the construction business, especially the people he met and worked with. He made many, many friends.

Lewis liked to fish, work in the yard, garden, and build things around the house. He was fascinated with cosmology and theoretical physics, reading many books and watching many television documentaries on various aspects of the subjects. One of his most favorite past times was cooking and experimenting in the kitchen. Preparing a delicious dinner for friends and family was very fulfilling for him.

The highlight of Lewis’ life was his son, Erick. He was very proud of Erick and his accomplishments, especially his work with the Naval Research Laboratory in creating a new algorithm for autonomous underwater vehicle data analysis (patent pending), graduating college with honors and obtaining his master’s degree in Computer Science at the University of Southern Mississippi in Hattiesburg, MS. He loved Erick so very much.

Lewis and Rhonda met in the summer of 1967. She was 14 years old and he was 17. They married in 1971 and celebrated their 42nd anniversary on July 24th, 2013. They have lived in many states for work, some of them more than once. They were undeniably soul mates and lived and loved for each other with all their hearts.

A Celebration of Life will be held in early January. Announcements and information will be made at a later date. We hope you will be able to attend.