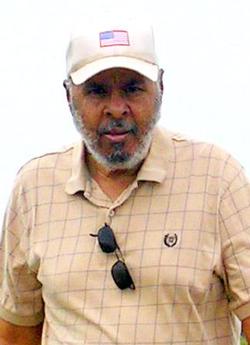 Lloyd Franklin Herring, age 67 of Wilmington passed away Thursday, March 19, 2015 at his home.

Lloyd was born in Duplin County on April 30, 1947. His parents were Frank Herring and Lattice Marshburn Herring.

Lloyd is survived by his sisters, Marian Sharpless and Bennie Sharpless and his brother, James Edward “Duke” Herring; step son, Mike Ramos; along with nieces, nephews and extended family and friends. Remembered is his wife, Gloria Herring and his sister, Maxine Tillman who preceded him in death.

Lloyd was a veteran of the US Army serving during the Vietnam War serving from June of 1968 to June of 1967. After leaving the Army, Lloyd graduated from James Sprunt Community College with a degree in Architectural Engineering. He worked for many years as a draftsman with Carolina Power and Light as well as other industrial companies during his career. Lloyd was a talented artist from his youth and his adult life.

Lloyd became a member of the Baha’i Faith in California about 40 years ago. At the time of his passing, he was a member of The Spiritual Assembly of New Hanover County, NC and an active participant in the local Baha’i Community.

A memorial service will be held 1 pm Saturday, March 21, 2015 at Wilmington Funeral Chapel.

To honor Lloyd’s memory a donation may be made to the Disabled American Veterans Chapter #11, 4601 Park Ave., Wilmington, NC 28403.