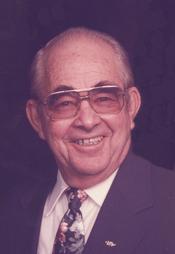 The burial will immediately follow at Greenlawn Memorial Park. Masonic rites will be accorded there by Wilmington Lodge #319, A. F. & A. M.

Louis was a lifelong resident of Wilmington, NC, born on September 1, 1924 to the late, Madie Bowen Smith and Louis Robert Smith. He was preceded in death by his brother, James Robert Smith, and sisters, Joyce Smith Savage, and Doris Smith Malpass.

Louis served his country proudly and honorably while enlisting in the Merchant Marines at the age of 20 as an AB Seaman. He worked on five ships from 1944-1946 in Belgium, North Africa, Turkey, Russia and England. In 1946 he joined the US Army as a Private First Class and served in the Philippines and in Korea until May of 1947. In 1965 he chose to further serve his country and joined the Navy Reserve as an E-7 Chief, Ship Fitter. He completed his service as an E-7 Chief, Hull Technician in 1975 and transferred to the Army Reserve for ten years when the Navy unit disbanded. He retired from the Army Reserve in 1985 as an E-7 Sergeant First Class (SFC) Supply Sergeant. In May 2010, Louis was among fellow veterans and guardians who flew from Wilmington aboard the Honor Flight to Washington, D.C. to visit the World War II Memorial. He accepted the appreciation from a grateful nation for his service and that of others who sacrificed their lives during their military service. He treasured this experience.

Louis was a Master Plumber and retired as the plumbing inspector of New Hanover County on August 26, 1986 after 20 years of service. Previously he worked 20 years for Orrell and Smith Plumbing Company. Louis was an active member of Wesley Memorial United Methodist Church. He was a 50 plus year member and two time Past Master (1994 & 2006) of Wilmington Lodge #319, A. F. & A. M., a 50 year member of Wilmington Scottish Rite Bodies, member of Wilmington York Rite Bodies, Sudan Shrine Temple, Arab Shrine Club, Past Captain of the Sudan Drum & Bugle Corps, and Goldenrod #142 OES. He was a lifelong member of the American Legion and VFW, and member of the Woodmen of the World. He understood his civic responsibility and served earnestly until his death.

In lieu of flowers memorials can be made to Wesley Memorial United Methodist Church, The Masonic Home for Children in Oxford, NC, or the Shriners Hospital for Children in Greenville, SC.