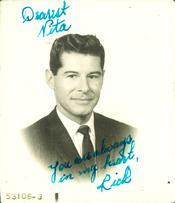 With
the passing of Frederick (Rick) Neumeister, the Cape Fear region lost a good
friend, an officer and a gentleman.  Rick
and his bride, Nita Neumeister, literally dropped anchor from their two-masted
schooner “Love Affair” behind Wrightsville Beach in the early seventies.  During the subsequent years, he became the
patron of area boaters, a good friend to neighbors, the constant companion and
mainstay for his wife and a source of good counsel for people needing help with
ailing boats, personal dilemmas or organizational challenges.  Those who knew him well called him “good
people.”

Rick’s
adult life was shaped by his service in the US Army Air Corps (USAAC) and
later, the US Air Force.  During World
War II he trained and worked in bomb disposal.
With the war’s end he became a logistician and moved to the newly formed
US Air Force.  There he enjoyed a rich
array of assignments ranging from duty in the Aleutian Islands to military duty
with the US embassy in Tokyo, a university teaching assignment in West Virginia,
squadron commander in Texas and, toward the end of his career, deputy wing commander
at a Strategic Air Command base.

During
his years in the Wilmington community Rick earned several nicknames. “Skipper”
was one, reflecting his seniority in the boating community and his
authoritative knowledge of a boat’s foibles and ailments.  Rick also had, to the bemusement of his
juniors and his wife, an uncanny and undiminished knack for attracting the
prettiest women in any setting.  Thus, his
alternate nickname was “chick magnet.”

But
until the end, Rick was an inspiration and role model to those who were
enriched by his warm, understated commentaries on the dilemmas of life.  He was impossible to match as a loving husband
to Nita.  He cared deeply about the
people and the leadership of the Cape Fear Sail and Power Squadron.  He served in “the Squadron” for over 20 years
in a variety of leadership positions and its members saw in him a soul mate of
those who love being on the water.

He
is survived by his loving wife of 55+ years, his son Jon of San Antonio, TX,
and several nieces and nephews.  There
will be no formal service or visitation at this time.  The family requests that any desire to honor his memory be expressed
by a donation to The Cape Fear Sail & Power Squadron for educational
purposes.