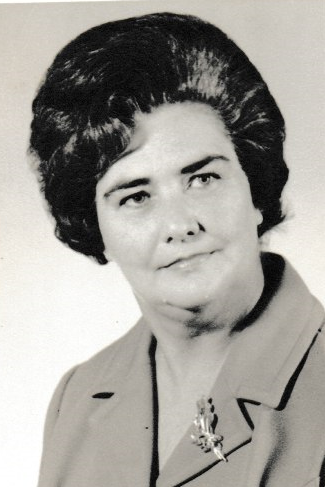 Her brothers and sister predeceased her, but she has a sister in law, Emma Moller (Gerald) who lives in Kansas with her family.

Lucille was a “Rosie the Riveter”. After graduating from Arnold High School in 1944, Lucille worked at a bomber plant near Omaha, NE when she met her future husband, SFC William Penn Croom, Sr who was back from the Pacific and training with his US Army transportation unit for redeployment to the Burma Theatre.

They married in July 1945 and after the war ended plans changed and a honeymoon train trip to North Carolina and a new life began, surrounded by her husband’s family. Strong ties remained with her parents and siblings in the Midwest, with memorable visits.

Lucille’s love of travel began as she and husband Penn were posted to duty stations in Europe where they were able to travel, visiting all western Europe countries including her relatives in Sweden. Her favorite posting was Bordeaux, France. She returned to England, Ireland, The Netherlands and Sweden as a member of the Friendship Force after retirement from the VA Hospital in Fayetteville, NC.

After moving from Texas back to North Carolina with a young family, Lucille was widowed at a young age. She never remarried, training as a librarian to support her growing family. Lucille was a reluctant but proud Gold Star wife, a long-time member of Peace Presbyterian Church in Fayetteville, and often expressed her deep faith in God’s helping hand.

A graveside service will be held at Moore’s Creek Baptist Church Cemetery in Currie, NC on Saturday Nov 16 at 12PM.

Our family would like to offer sincere appreciation to her caregivers at Dayspring of Wallace, Brian Center of Wallace, Vidant Hospital and New Hanover Regional Hospital.

In lieu of flowers, memorials may be given to Gold Star Wives, or a veteran’s organization of choice.