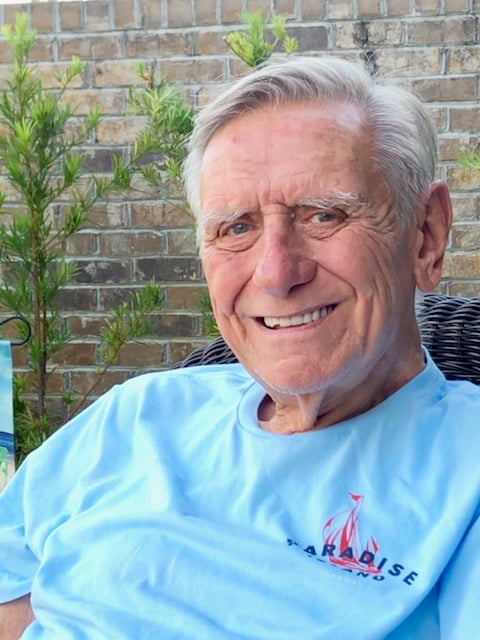 He was born on May 15, 1936 in Gary, Indiana, the son of Truman Elisha McCasland and Virginia Lee Cannon McCasland.

He leaves behind his wife of 43 years, Kathleen McCasland and five sons. Jeff (Sharon) and Dave (Rebecca) live in the DC area, Tom (Susie) in Houston and Truman Clark (J Lauren) and Michael (Maayan) in Brooklyn, NY. Grandchildren include Christopher (Tiffany), Ashley (David), Jacob, Annabel, Susannah, Ethan, and great grandchild Brooks. His sister Cheryl (Jimmy) Hinds and niece, Becky Hinds, are from Tulsa, OK. Mac is predeceased by his parents and brothers Terry and Charles.

After his graduation from Portage High School in 1954 Mac served in the Navy until 1958 as a Navy Hospital Corpsman at Great Lakes Naval Hospital and then with the Sixth Marines at Camp Lejeune, NC. Upon discharge he returned to Gary and worked in the operating room at Methodist Hospital as an OR Tech while taking evening classes at Indiana University Extension. He received a Bachelor of Science degree in Environmental Health in 1964 from IU and a Master’s Degree in Public Health from UNC Chapel Hill. He then accepted a commission in the US Public Health Service and was immediately appointed Chief of Environmental Health and Biomedical Engineering for the PHS Hospital System in Washington, DC.

After two years he was selected for a Residency Training Program at Tulane University in New Orleans in Institutional Environmental Health. Upon completion he was awarded a Doctorate in Public Health and he returned to the DC area. He spent over twenty years as a Commissioned Officer in positions including Director of Refugee Health during the Cuban Refugee Crisis under the Carter Administration, Director of the PHS Hospital in San Francisco, Deputy Director of the National Hansen’s Disease Program and the first Director of the Childhood Injury Compensation Program.

Upon his retirement Mac and his wife Kathleen moved to Wilmington, NC, where he began teaching at Webster University at Camp Lejeune in a master’s program and served as the university’s faculty advisor for many years. He enjoyed traveling, gardening, woodworking, cooking, and singing. Above all he was a devoted husband, father, grandfather and friend who always knew what to say and do to make someone feel better.

Due to the restrictions caused by the Corona virus a celebration of Mac’s life will be held at a later date.

Donations can be made in Mac’s memory to Kings County Tennis League (KCTL), a non-profit organization founded by his son, Michael, serving children living in and around Brooklyn public housing. KCTL uses tennis and off-court educational activities as instruments for youth development. https://www.kingscountytennisleague.org/#homepage