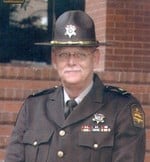 David was born in Beckley, West Virginia on September 29, 1950, to the late Kyle and Anna Lee Trent Stevenson. In addition to his parents he was preceded in death by a sister Sandra Stevenson.

Major Stevenson began his law enforcement career with the New Hanover County Sheriff’s Office in 1973. During his employment, Major Stevenson served the citizens in Patrol, as a founding member of the Sheriff’s Alcohol Field Enforcement Unit and the Commander of ERT, Civil, Detectives, and as Chief Bailiff. In 1992 he was assigned to the Jail and was soon the Supervisor of the Jail Annex. In 1995 he was promoted to Assistant Division Commander of the Jail and in 2000 promoted to Chief Jailer. In 2002 he was promoted to Major in charge of Detention and Support Services and was recognized with the Officer of the Year Award. David oversaw the construction of the new Detention Facility. He was also VP of the North Carolina Administrators’ Association and retired in 2005.

David was a member of Wrightsboro United Methodist Church where a funeral service will be 11:00 A.M Tuesday, December 29, 2009 with burial following in Oleander Memorial Gardens. Revered Bill Haddock and WPD Chaplain Donald Smith will officiate. The family will see friends 6:00-8:00 PM Monday at Wilmington Burial and Cremation Service.

Daddy always said “Life’s journey
is not to arrive at the grave safely in a well preserved body, but rather to slide in sideways, thoroughly used up, totally worn out, shouting Woo Hoo, what a ride”