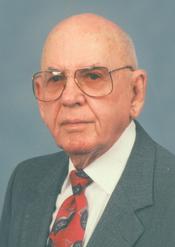 Malcolm James Ballard of Hampstead went to be with his Heavenly Father on November 20, 2011.

He was born on March 28, 1917 to Walter and Sadie Bracy Ballard in Sumter, SC. Malcolm is preceded in death by his beloved wife, Sarah Pearle Monroe Ballard. Their marriage of 62 years was a model of love and devotion for his children. Malcolm is survived by his children, Malcolm James Ballard, Jr., Joseph Michael Ballard, Anna Ballard Gunza, and Susan Ballard Lanier. He is also survived by his adoring grandchildren, Lisa Ballard McCollough, Jennifer Ballard, Tara Susanne Ballard, Allison Ballard Davis, Michael Joseph Lanier, and Benjamin David Lanier. Malcolm has one great grandchild, Ian James Davis. He is preceded in death by all his siblings, Harriet Ballard Puglia, Walter Ballard, Lucille Ballard Roberts, Geraldine Ballard Mosher, and Raymond Ballard.

Mr. Ballard graduated from Sumter High School in 1935. He had a long and very successful career, which started at Shaw Air Force base during WWII. By the war’s end he was in charge of over 600 men in air craft development and maintenance. He was responsible for 3 US Air Force patents. After the war, Malcolm was hired as a sewing machine mechanic at France Neckwear Company in Wilmington, NC. While there, he developed the first clip-on tie, known as the Snapper tie. By the time he left there, Mr. Ballard was Vice President of the Company. He later started his own necktie factory, M.J.B. Manufacturing, in Wilmington. By the time, he sold the company at age 75, there were over 200 employees.
Malcolm James Ballard touched many lives with his optimism and his generosity. He will be missed by all those who loved and learned so much by his example.