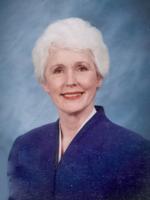 Margaret Ann Decker, 71 of Wilmington, NC lost her battle with cancer and died on Sunday, September 26, at her home in Pinehurst at the Cape.

Margaret was born in Memphis, TN. Her adoptive parents, Edward and Evelyn McClain lived in Wichita, KS which became her first home.

Margaret graduated from Marion High School in Marion, Kansas in 1957. She attended Emporia State University for one year. She married Larry Lee Redenbaugh in 1958 who preceded her in death in 1993.

Margaret received her Bachelor of Arts and Master of Science degree, with Honors, in Speech Language Pathology from the University of Washington, Seattle, Washington in 1984.

She and Dennis were married June 19, 1993 in Seattle, Washington and moved to Wilmington in 1994.

She worked for Autumn Care, Liberty Commons, Davis Health Care and other nursing facilities as needed and had patients at Plantation Village in Wilmington. Prior to moving to Wilmington she was a manager of Therapy Service Organizations. She opened her own office, in Wilmington, to provide therapy to Senior Citizens.

Margaret was a member of the ASHA, American Speech-Language-Hearing Association.

Her passion was singing in the Choir at First Presbyterian Church and served on numerous committees and as a Deacon.

Memorial service will be Friday, Oct 1, at 2:00PM at First Presbyterian Church, 125 South Third in Wilmington.

In lieu of flowers one may make donations, in Margaret’s name, to Lower Cape Fear Hospice, 1414 Physicians Drive, Wilmington, NC 28401.