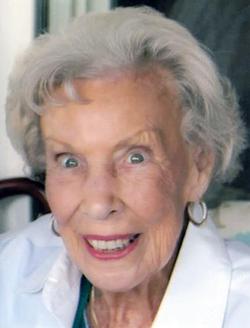 Peggy Brady, of Wilmington, passed away on Sunday, April 12, 2015 at Davis Health Care.

She was born April 25, 1921 in Philadelphia, Pennsylvania the daughter of the late Joseph and Gertrude McNamee. Peggy was preceded in death by her three siblings.

Peggy was a devoted mother, grandmother and great grandmother who always helped and supported her family. She was very active and worked into her eighties as a physician’s administrator for long time family friend Dr. Battafarano in Wayne, PA.

In 2005, she moved to Plantation Village to be near her family and spent 10 years enjoying the friends that she made there and the beautiful surroundings. All of her Grandchildren who live all over the country visited frequently which she enjoyed immensely.

In lieu of flowers, memorials may be made to the Lower Cape Fear Hospice Foundation, 1414 Physicians Drive, Wilmington NC 28401.