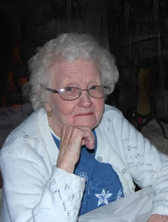 She was born in Charlotte, NC on August 2, 1921, the daughter of the late Irene Hazelwood and John Suddreth. She was also preceded in death by her husband, Paul W. Smith, and a brother John H. Suddreth.

She is also survived by her sister-in-law, Helen Suddreth, and a special cousin, Esther Suddreth Stewart.