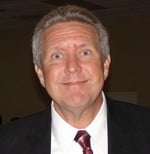 He was local sales manager at WECT-TV in Wilmington. He lived in Charlotte 22 years, where he was in charge of national television advertising at HRP.

He was born in Indianapolis and raised in Fort Wayne. He graduated from New Haven High School and Indiana University.

Surviving are his wife, Janet; daughter Kathryn Diener of McComb, Miss.; sons Joseph of Charlottesville, Va., Michael at the University of Dallas, John of Madison, Miss. and Peter of Wilmington; grandchildren Joseph and Charles Diener of McComb, Miss; sisters Rosalie Hanefeld and Martha Shull, both of Fort Wayne; brothers Arthur R. “Chuck” and Jim, both of Fort Wayne, and Mark Adamcik of Lebanon, Ind. His father, Reid G. Chapman, died in 2006. His mother, Janet K. Chapman, died in 1976.

In lieu of flowers, mass offerings can be said in Mark Chapman’s name. Memorials to Peter Chapman’s education fund.