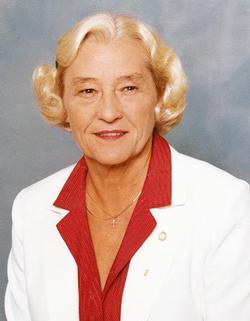 She was born on April 11, 1917. Her parents were Andrew Jackson Hyde and Susan Wakefield Hyde. She was the widow of Harrell Reynolds, Sr. and Ervin Stack.

Martha was a proud veteran of WW II having served as an Army Nurse with the rank of 1st Lieutenant serving from January 1945 until June of 1947.After the war she studied and graduated from Johns Hopkins University Hospital with a degree in Surgical Nursing. She was an active and longtime member of Winter Park Baptist Church and was a proud member of the Keenagers Group

Martha is survived by her sons, Philip Reynolds of Wilmington and Michale K. Reynolds and wife Lynda of Idaho and his daughters, Amanda and Kaitlyn; one surviving brother, Tharell Hyde; step-son, Harrell Reynolds, Jr. and wife Permelia and children, Harrell III, Brian and Kimberly; special friend and care giver Esther Brown; several nieces and nephews including Joan and Ray Williams of Carolina Beach. She was preceded in death by six siblings.

A memorial gathering for family and friends will be 3 to 4 pm Tuesday, April 14, 2015 at Wilmington Funeral Chapel.

In lieu of flowers, please honor her memory with a memorial donation to the Lower Cape Fear Hospice Foundation, 1406 Physicians Drive, Wilmington, NC 28401.