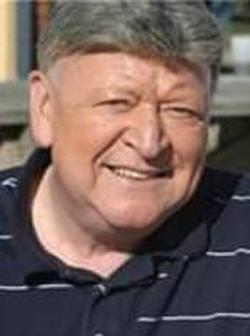 Marvin Peele Walters, a.k.a. “Duke Jr.,” ladies’ man, knock poker king and encourager who was loved by everyone he met, peacefully left this world early in the morning on Sunday, February 1, 2015 at Lower Cape Fear Hospice Care Center in Wilmington after a long, well-fought battle with COPD. His right hand held his daughter, Chrisa’s hand; his left hand clung to his beloved can of Skoal wintergreen pouches. (after all, Kenny Jr., had gone to three different stores to find the correct replacement for the Renegade his Poppa no longer liked.) To the very end, his head was kept warm by his infamous flair hair hat, and he was in the company of his ZBD Kids’ Day bear (or to some, a hippo) given to him by Sarah the night she and Josh made sure he had his favorite Wendy’s Asiago Ranch Chicken Club Sandwich and Chocolate Frosty.

Born June 24, 1949, Marvin was reared in Laurinburg and at Skyway Terrace, near Laurinburg-Maxton Airbase. As a young boy, he endured nine months of traveling back and forth from Laurinburg to Chapel Hill to receive treatments for rheumatic fever and later in life, suffered the tremendous pain of giving birth (to a kidney stone). The hardships life presented Marvin were rarely known by others, because he was too busy fishing at Aunt Lou’s hole, would rather make others laugh than cry and just plain loved life. He asked God to bless those less fortunate than he, and he lived by the thought he so often shared with others, “if you look around, you’ll always be able to see someone else is having it worse than you.” Life experiences often spawned poetry and songs through the years, and made for a strong, honest diligent and loving son, brother, husband dad, uncle , cousin and friend.

Marvin was one of two floor managers at Mr. Bill Hudson’s Skateland Roller Rind and on the Board of Directors for the MCRSA (Mid-Carolina Roller Skating Association). The good-looking guy all the girls went crazy over, Marvin had his Chicago skates and floor manager whistle on about every time the doors were open (even the Sunday Matinee Skate) from 1964 until the night he punched his friend in the nose. He apologized for doing that , and later declared being barred for life from the rink to be the worst punishment anyone could have laid down for him.

While others were being drafted, Marvin and his best friend together voluntarily enlisted in the Army during the hear of war in 1967. He received an honorable discharge, so he didn’t end up having the opportunity to serve in Vietnam. Nonetheless, he was more than eager to show up at the skating rink in full uniform to be greeted by all the sweet-smelling, pretty girls.

At age 20, he married his brown-haired, hazel-eyed true love, Brenda Stubbs, whom he would share 29 years with. She and her present husband, Charles Jenkins befriended and visited him several times during his sickest days, an act of love and support that will forever be appreciated by their children. Over the next seven years, he became daddy to three children, two girls first, then finally got his boy. He taught Christ, Amy (Steve) and Mike to love family and country, appreciate nature and music, visit the elderly and that you can’t win the lottery if you don’t buy a ticket. Those, and many more life’s lessons were handed down to his four grandsons and many nephews during special moments they shared sketching, bowling, fishing, roasting oysters and playing poker and Yahtzee. Kenny (Jesse and first great-grand on the way), Josh (Sarah), Tim(Abby) and Eric were the topic of many conversations as he was on very proud “Poppa.”

In the early 1970’s Marvin led the band “Station 5” as the lead singer and lead guitar. The five-member band also included his brother, James “Bud” Walters on rhythm guitar, Larry Fore on drums, Chuck Roberts on bass and Harold Campbell on keyboard. They spend a few years playing locally and many years after that “picking and grinning.” Marvin was rarely seen performing without his trademark 1976 Sunburst Fender Telecaster and Fender Twin Reverb Amp. He wrote many songs through the years and “Set Me Free” was later produced by Curly Putman. In 1977, it recorded and made famous by Merle Haggard. Many friends and family especially remember him singing “Little Red Riding Hood” and a few were even blessed enough to have a song written just for them.

Marvin was quite a supervisor for just about any project, a creative visionary and passionate lover of people. As a young man and natural artist, Marvin also worked as a sign maker, crafting and lettering signs all over Scotland County by hand. He worked many years as Planning Manager at JPS Carpets and after 15 years as Regional Sales and Marketing Manager for South Atlantic Galvanizing, he reached his goal of retiring at the beach. He spend several years living among dear friends at Shallotte Villas, near his favorite Holden Beach Fishing Pier. As his failing health prevented him more and more from enjoying the sand and surf, he spent much of his time online posting words of encouragement and beach weather reports for his many Facebook and COPD group friends.

If would be impossible to mention each person by name who was significant to Marvin, but that’s ok because he made sure every person he encountered knew they were special to him. He loved his many nieces and nephews as his own, and his cousins like they were siblings,. We express our heartfelt gratitude to the following for the loving care shown to him and us during his sickness: Dr. Babysarojah “Ravi” Ravindran, Marie Wheatley, FNP, Dr. Chris Ellis, Dr. Chris Isenhour, doctors and staff at Watauga Medical Center, Blowing Rock Physical Rehabilitation Center, Brunswick Novant Health, New Hanover Regional Medical Center, and Lower Cape Fear Hospice; Kevin Tacheny, OTR; and special friend Carol Henderson.

Marvin openly acknowledged Jesus Christ as his personal savior, and often shared his faith, particularly with those who were down and brokenhearted. We rejoice in knowing he has been reunited with his parents, George Edward and Alma Mae Peele Walters; brothers, Carlyle and Dewey (Isobel) Walters; sister, Betty Jo Caulder (Dewey); sister-in-law, Gail Jeffcoat Walters, as well as several other family members and dear friends.

Marvin preferred “John Wayne” coffee, and could walk and talk like him too. He knew if a Chinese restaurant was good or not by their pork egg foo young, loved winning (regardless if it was bingo or golf, but especially the Mega Millions Lottery ), took some beautiful pictures throughout the years, cherished time with each and every one of you (and you knew it), could eat a mess of fried pork chops and Grandma’s potato salad, spent many a day fishing with his brothers and other family at Gum Swamp, Xway and the college, and gave many of us a nickname that will be remembered forever. He discovered love again when he connected with his sweetheart, Linda Regis of Colorado. There’s so much more that could be said of this wonder many we call Daddy, Poppa, Cudlap, Mr. T., Bouge, Marto-Polo… but for now…SLASH & CHOP!!..(slash a couple more times…and chop 2 more). *Don’t worry .. it’s not a big deal if you don’t know what that last comment means. But, it is a big deal if you do! (slash-slash!)

A memorial service will be held at 2:00 p.m. on Sunday, February 15, 2015 at the Richard Boles Funeral Service Chapel.

The family kindly requests in