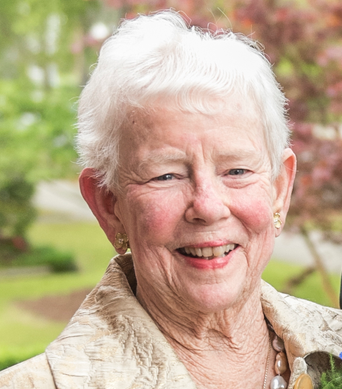 She died peacefully on Sunday March 22, 2020 in the extraordinarily loving and professional care of the medical staff and caregivers of The Davis Community, in Porters Neck, Wilmington, North Carolina – after a long battle with multiple serious health issues.

Mary was educated in mostly Catholic schools in the Washington, DC area, graduating from both Georgetown Visitation Preparatory School there, and Chestnut Hill College in Philadelphia, PA, from which she graduated with a Bachelor of Science degree in 1962.

She was a microbiological medical lab technician in Washington, DC after graduation until marriage.

On February 2, 1963, Mary married Charles Daly Dean, Jr. of Virginia Beach VA, in Washington, DC. The couple settled and raised their family in Virginia Beach, VA for 20 years, before moving to Wilmington, NC in 1984.

Mary was a most loyal Catholic, especially in her dedication to protecting “the least among us”, which became an “apostolate” for her. She was a woman on prayer. Until her illness began to consume her, she prayed the Liturgy of the Hours and the Rosary every day and attended Mass daily.

She is the humble but great unsung hero of the earliest opposition to the exploitation of tiny human beings in their embryonic state for medical research and experimentation. It followed the unprecedented world’s first live birth of a human being from In Vitro Fertilization and Embryo Transfer: the first so-called “Test Tube” baby, in 1978.

She gathered and disseminated information around the world as to why it should NOT be allowed public policy – from top medical doctors and scientists, philosophers, and medical ethicists. They included pioneer pediatric surgeon C. Evertt Koop, MD, later Surgeon General of the United States, and bioethics advisors to the President.

Most notable among them was the world’s foremost medical authority on conception being the beginning of every human life, Professor Jerome Lejeune, MD, PHD, Chairman of Genetics at the University of Paris.

Mary and her husband Chuck felt blessed to have been befriended and counseled by Doctor Lejeune in his world-wide medical “apostolate”, traveling the world to protect every human life. Previously he had become a close friend and medical counselor to St. Pope John Paul II, and his successor Pope Benedict XVI.

For her own apostolate in Dr. Lejeune’s footsteps, Mary was recognized, and received a personal audience with, and blessing from, both St. Pope John Paul II and Pope Benedict XVI in Rome.

In her years after moving to Wilmington, she was a docent at St. John’s museum, an active parishioner and parish council member at the Basilica Shrine of St Mary, and an active reading volunteer for underprivileged children at Lakeside School.

In her later years Mary was a regular volunteer for the many disadvantaged in our community at the Basilica Shrine of Saint Mary parish outreach program, now called the “Sister Isaac Center.”

Mary was a voracious reader of books, and loved music. The house was always filled with classical music, especially at dinner time. She made sure her family always shared dinner together, every night, at 7 pm sharp.

Mary’s whole life was dedicated to her faith, her husband, her family, her community, and her country.

She is survived by her loving husband, Charles “Chuck” Dean, and their five sons: Charles III, Thomas, Patrick (Patrisha), John and Matthew (Teresa).

She is also survived by her siblings, Br. Patrick Edward King, FSC, Patricia King Marshall (Robert) and Martha Louise King. She was predeceased by her brother Joseph Thomas King, III.

Due to the current medical crisis, there will be a private, family only, internment.

May God rest her soul.