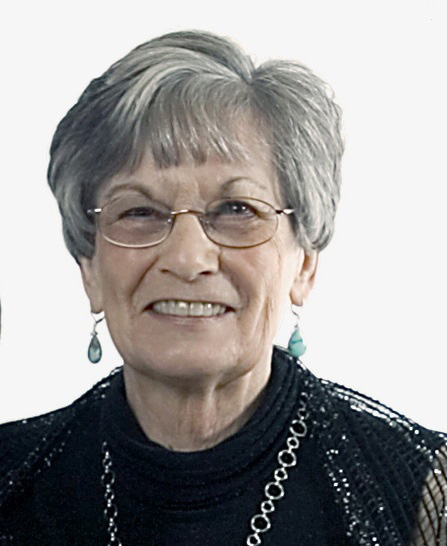 She graduated from Lansdale School of Business and worked locally at First
Pennsylvania Banking & Trust Co. and then at NARCO until her marriage to 2nd Lt.
William Donald Bryden, USAF in August of 1959 in Harlingen, Texas. Mary Lou spent
27 years as a military wife, moving with her husband and two sons to bases all over the
country and to Ascension Island, in the South Atlantic Ocean, volunteering and working
with the Officers’ Wives Club as editor of the newspaper, decorating chairman, and
OWC president. After her husband retired from the Air Force they moved to Maryland and
lived in Gaithersburg for 13 years, where Bill worked for IBM, Loral, and Lockheed Martin.

While on their final military assignment in San Jose, CA, she developed her
artistic talent in designing and building stained glass windows. Before retiring to their
present home in Wilmington in 2000 they lived in England for two years, in London and
in Portsmouth, where Bill negotiated a contract for a new air traffic control center in
Scotland, and where Mary Lou continued her stained-glass work.

From her start in California, Mary Lou developed her love for stained glass, turning it
into a small business. She designed and fabricated over 150 panels and sold them all
over the country, and in England. While living in London, Mary Lou joined the London
Society of Designer Craftsmen. She loved sketching and drawing, but was fascinated
by the stained-glass process, and settled into it with a flourish, donating some of her
work to the Landfall Foundation and to the Wilmington Railroad Museum as well as
decorating her home with six large stained glass windows. Her stained-glass work will remind
us all of her love of the beautiful things in life.

There will be a Celebration of Life for all to join and will be announced in the near future,
and her cremated remains will rest in peace in the Chapel Woods adjacent to the Kenan
Chapel in Landfall. In lieu of flowers a donation to the Wilmington Railroad Museum, the
Making WAVES Foundation, or to the Landfall Foundation will be appreciated.