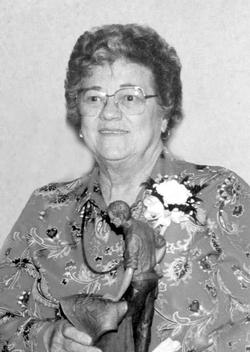 Lou was born March 16, 1932 in Clinton, NC and was the youngest
daughter of eight siblings born to Marion “Ben” Crumpler and Sudie Jane Reeves. Mattie Lou as she was known by her childhood friends, graduated from Hugh Morrison High School in Raleigh in 1949. She recently attended her 65th class reunion.Besides her family, Lou loved her work and bowling. She retired in 1997 from Davidson and Jones Construction Co. as their Human Resources Director, after nearly 20years of service.Lou bowled for over 40 years. She attended 35 WBA National Tournaments and was inducted into WBA Hall of Fame in 1992 and NC WBA Emeritus in 1997.

Lou joins her beloved husband, Charles (Chubby) parents, brothers, sisters and infant
grandson who preceded her in death.
She is survived by her children, Mike Hinnant (Barbara), Cindy Hinnant
Redd (Rodley) and Jamie Hinnant Becker(Lenny); grandchildren, Michele
Hinnant, Melissa Smith, Cameron and Jonathan Redd, Jim James, Jessica
and Joseph Becker; and great grandchildren Dylan Hinnant, Riley
McCracken and Kaya Smith. Lou will be missed by so many friends that
bowled with her, played cards with her or just loved her.

A celebration of her life will be held Friday, August 1, 2014 at Raleigh Memorial Park’s Chapel of the Mausoleum, 7501 Glenwood Avenue, Raleigh, NC 27612 at 2:00 p.m. Family visitation will be held at the Chapel one hour prior to the service.