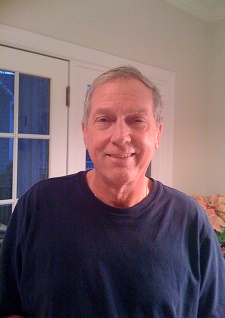 Michael David Smith, age 70, of Wilmington, passed away Thursday, March 9, 2017 at his residence.

He was born September 29, 1946 in Charlotte, North Carolina the son of the late Eleanor Smith and George A. Smith, Jr.

Mike graduated from Garinger High School, the class of 1964. He went on to serve in the United States Air Force where he received training in information technology (IT) and network security. He used this education to fulfill his career outside of the military. Mike moved his young family from Charlotte to New Orleans where he spent 20 years working on network security. He then moved to Longmont, Colorado then Fort Smith, Arkansas for shorter years where he continued in IT in the long term care industry. He finally settled in Wilmington so he could be closer to his children and grandchildren.

In the years before Mike got sick, he enjoyed sitting on the sidelines watching his granddaughters play soccer, softball and basketball. Even until his last day, he called checking on the scores of their games from the night before. It was difficult for him to make the trip to Raleigh to watch his younger grandchildren play basketball, football and dance around in a tutu, but he was just as proud of them. But in reality, on any given day, if you were to ask him what he was doing he would say, “Oh just laying here watching FOX news”. Yep! That’s what he did all day! It was Fox News or ESPN all day and night! His love of ACC sports and especially the Tarheels was evident. He didn’t mind making sure his son-in-law, Brandon, knew that the Tarheels were better than the NC State Wolfpack in every sport, except clogging!

Mike was very proud of his children, which was evident of the memories found in his filing cabinet. Folders labeled, Michelle and Brian. Brian’s folder had a postcard from Paris that he had sent to his dad from 1992, his first resume out of college and a blue baby cap announcing to his father that he himself was going to be a father to his own son. Michelle’s folder included her acceptance letter to graduate school and a middle school newsletter where she won first place in a poetry contest in 6th grade.

Left to cherish his memory are his daughter, Michelle Arthurs and husband Brandon Arthurs of Wilmington; son, Brian Smith and wife Christina Smith of Apex; grandchildren, Grayson Arthurs, Delaney Arthurs, Braden Smith and Finley Smith. He also leaves behind his beloved cat, Louie. A special thank you to his wonderful friend and constant supporter, Jeanne deMontbrun.

A graveside service will be held at Sharonview Memorial in Charlotte, North Carolina on Tuesday, March 14, 2017 at 2:00 pm.

Mike was a giving man and loved to do for others. For Christmas, he wanted to give his granddaughters money and take them shopping and have them give the money to unsuspecting people for Christmas. Unfortunately, that never happened, but it was the thought in his heart. You could often find him paying for the groceries of a fellow shopper, paying for a meal of a uniformed police officer and most recently he anonymously paid a vet bill for a friend whose cat passed away. So the family asks in lieu of flowers and in honor of Mike, pay it forward.

Share Memories and condolences by clicking on the ” Condolence” tab.