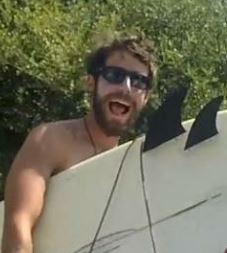 He was preceded in death by his father, Stephen Mark Honey.

He is survived by his mother, Helene Vazeos Honey and his brother Stephen Mark Honey II. He also leaves his maternal grandmother Katina Vazeos and his paternal grandparents, Bill and Berta Honey. He is also survived by his aunts, uncles and cousins.

Michael graduated from Countryside High School in 2010. Although he was offered a full scholarship to college, he chose to take the road less traveled, by exploring the country and sharing his passion for life through his music. Michael was a self-taught, skilled guitarist and vocalist and he was as much fun to watch play as he was to listen to. Michael was also an avid lover of sports and his innate abilities matched his desire to play. During his young life, he excelled at football, basketball, soccer, wrestling and baseball. Surfing, however, quickly became his passion. And since moving to Wilmington, he could be found every weekend on Wrightsville Beach catching epic waves. But Michael’s greatest talent was how he taught by example, how to appreciate each day as a blessing and how to use every opportunity to create lasting memories. He was a loving, big hearted man, with an endearing childlike innocence. Michael lived life to the fullest and he shared his heart and his joy for living with everyone he encountered and he will be greatly missed.