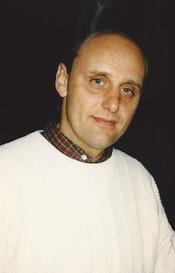 Mike was a family man, first and foremost. His wife, Marie, was the love of his life, and his children, Mike Jr. and Heidi, meant the world to him. He was blessed with two darling grandchildren and died knowing the promise of another one on the way. Although his career led to moves all over the country, the tightness of the family bond meant wherever they went, they were always at home.

The term ‘zest for life’ doesn’t begin to do Mike justice. His exuberance was infectious – everyone around him got caught up in it. He was joy personified, his heart was huge, and he had an amazing generosity of spirit. Everywhere Mike went, from his four years in the Navy, through all of the family moves, he made friendships that stayed with him throughout his lifetime. His humor was legendary, and laughter was his trademark. That remained unchanged even toward the end, when a hospice nurse dubbed him “The Trickster”.

Mike loved nature, running, cycling, classic cars and playing his guitars. He loved music – especially the blues and jazz. He devoted much of his free time to working on the family home, keeping everything in immaculate shape.

It was Mike’s deep love of God that allowed him to remain strong through the devastation of his illness. He was surrounded by the prayers of the many, many people who love him, and prayed for him during his 16 month battle with cancer.

Michael L. Bucher –child of God, beloved husband, father, grandfather, brother, friend, and mentor – rest in peace. We were blessed to know you.

The family would like to give a special thanks to Lower Cape Fear Hospice, where memorial contributions may be directed, 1414 Physicians Drive, Wilmington, NC 28401.