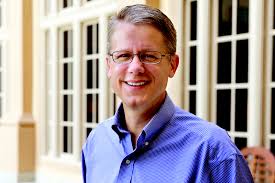 Mike was born in Columbus, Mississippi on October 30, 1964 the son of the late Joe
Dee Adams, Jr. and Julia Marilyn Rester Adams.

Mike’s teenage years were lived with a love for soccer and music. Although an injury
derailed his goalie career, he was skilled enough musically to pay his way through
college and postgraduate education by playing guitar in a duet. Upon earning his
doctorate at Mississippi State University, Mike became a Criminology Professor at
UNC-Wilmington as a staunch atheist and liberal. After seeing the mistreatment of
prisoners while doing criminology research in a South American prison, Mike realized
that there must be an objective standard of Good by which we could make sense of evil
and injustice. This helped lead him to Christianity which dramatically changed his
outlook. As his books and columns became more conservative, Mike found that the
university began to deny him promotions (even though he was continually rated very
highly by students). The case went all the way to the United States Fourth Circuit Court
of Appeals where Mike won a jury judgment that continues to protect the free speech of
professors to this day.

Over the years, Dr. Adams also taught over 15,000 students at Summit ministries and
several other venues. He is the author of several academic papers, hundreds of
columns, and three books including the most recent, Letters to a Young Progressive:
How to Avoid Wasting Your Life Protesting Things You Don’t Understand. Mike wrote
and spoke in support of the unborn and debated outspoken abortion advocates.
Several children are known to be alive today because of his work.

Mike was widely admired for his direct and often satirical approach to issues, but also
viciously attacked by his political opponents. Mike loved people and he defended the
rights of all of them to speak their minds. Our country has lost a bold advocate for
freedom and truth, but he will not be forgotten. We grieve that Mike is absent from his
body but rejoice that he’s now “present with the Lord” (2 Cor. 5:8).

A private burial service will be held, and a public memorial will be announced at a later
date.

Share memories and condolences with the family by clicking on the “Condolence” tab
below.