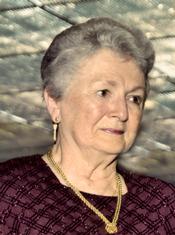 On Thursday, October 3, 2013, Mildred went to be with her Lord and Savior. She was 79 years old and was married to her husband Roger for 58 years. They have five sons and nine grandchildren.

Millie was born in New York & lived on Long Island for 59 years until she and Roger retired to Wilmington.

Their oldest son Roger is a “teaching brother” and a member of the Marianist religious community on Long Island. Their next son, Louis lives with his three children, Ben, Keith and Grace in Aurora, Colorado. Their third son is Terence, his wife Marian and their three daughters, Victoria, Kathryn, and Lauren live on Long Island. Kenneth, the next son and his wife, Cornelia and their two children, Ross and Olivia live in San Francisco. The youngest son, Christopher lives in Wilmington, his son Matthew attends grad school in Ohio.

Millie has a brother, Robert Mann and his wife Jo who live in Charlotte, and a sister Joan Campbell, and her husband Bert live in Houston, Texas.

Mildred also had three brothers who preceded her in death, William, Walter and Kevin.
Millie was a very active volunteer, such as the Pro-Life Movement for many, many years, starting on Long Island and continuing in North Carolina. She managed the Pro-Life Ministry at Immaculate Conception Church for 15 years and taught the “First Communicants” their studies for twelve years and was a Eucharistic minister to the homebound parishioners for ten years.
Millie loved art and was active in ceramics, painting and quilting. She also loved to play golf and cards with her many friends.

A funeral mass will be held at 9 a.m. on Saturday, October 12th at Immaculate Conception Church. Burial will take place on Long Island at a later date.