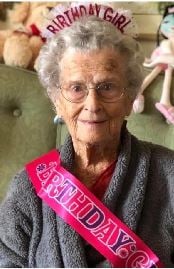 She was born January 17, 1926 to the late Henry J. Lewis and Margaret Reynolds Lewis. She always lived in Leland and was a “Rosie the Riveter” during the war welding on cargo ships in the Wilmington Shipyard and also was a seamstress in multiple manufacturing facilities in Wilmington.

Her grandchildren will always be thankful for showing them what it means to not only be strong, but to be kind and compassionate to those around you as well. She never met a stranger and her heart was always open to making a new friend no matter where she was or who they were and that is one of the many things they have always admired about her.

The family would like to thank the nurses and doctors at New Hanover Regional Medical Center, ICU and Cape Fear Life Center for the care shown to our Mother. Your love and compassion was unbelievable.

Due to the Corona Virus a celebration of life will be held at a later date. In lieu of flowers donations can be made to Elah Baptist Church for a Prayer Room or to the Lower Cape Fear LifeCare Center.