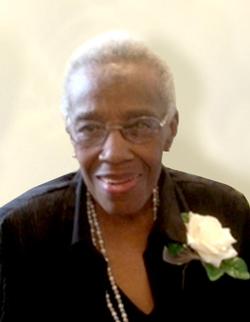 Stelle was raised in Bessemer City NC with her siblings and parents until 1941 when they relocated to Wilmington NC due to employment advancement for her father who worked as a longshoreman.

Stelle began her education in the public schools of Asheville NC. Following relocation to Wilmington NC, she continued her education at Williston Industrial School system and finished her schooling at Cape Fear Community College.

Stelle grew up attending Mt. Zion AME Church and later became a faithful member of Mt. Olive AME Church as an adult. Stelle served on the Senior Choir, Usher Board, Young At Heart Club and was a Class Leader.

Upon graduating from Williston Senior High School in the class of 1947, Stelle’s work experience began as a housekeeper, continued at the National Linen Service and American Standard with her career ending at General Electric after working 20 plus years. Stelle also completed coursework related to her career at General Electric as well as non-credit coursework through Cape Fear Community College in her later years.

As a young woman, Stelle met and married William McLean and although they did not have any children from their union, Stelle had three children from previous relationships Ardith, David and Kenneth as well as a grandson she helped to raise David “Mikie”.

Prior to her health declining, Stelle enjoyed gardening, crossword puzzles, traveling, spending time with family, bowling, serving at church-particularly with the dinner sales, was an active member of the senior citizens club, played scrabble and bingo with her friends as well as watched Wheel of Fortune and Jeopardy nightly.