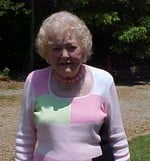 Myrtis Eargle Carson, widow of Arthur George Carson, slipped away on Wednesday, December 30, 2009 at her daughter’s home in Surf City, NC. into the arms of her loving Savior.

She was the daughter of the late Henry Albert Eargle and Callie Juanita Smith Eargle.

In addition to her parents and husband she was preceded in death by her brother, Roy Eargle, and her sisters Ruth Eargle Blalock, and Nell Eargle Pike.

A service will be held at the Chapel Mausoleum at Elmwood Cemetery in Columbia, SC on January 8, 2010 at 2:00 p.m., with the Rev. H. R. Patterson officiating. A visitation and reception will be held at Eau Claire Presbyterian Church immediately following the service.

In lieu of flowers, memorial contributions may be made to Eau Claire Presbyterian Church, P. O. Box 3156, Columbia, SC 29230.