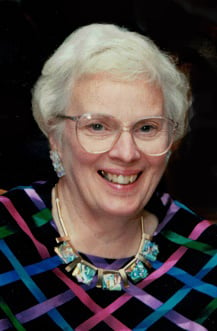 Nancy Ann McGinnis Handlan, age 81, passed away peacefully on Friday, August 17, 2018 at the Davis Healthcare Center in Wilmington, NC with two of her granddaughters, Kerstin and Mychaela, by her side.

She was born to Paul Sherman McGinnis and Sidney Bacon McGinnis on October 1, 1936 in Kansas City, Missouri, and was the youngest of three children.

She married Edwin Eugene Hess, Jr. at St. Andrew’s Episcopal Church in Kansas City in 1956. She met Ed while they were both students at the University of Missouri. They quickly began their family having their first child, Elizabeth in 1957. They went on to have two other children, and Ed enjoyed his career as an electrical engineer. They relocated to Parkersburg, WV in 1967 when Ed took a new job with A.B. Chance. Nancy was unexpectedly widowed in 1970. She found comfort in her home church, Trinity Episcopal Church, and this is where she met her second husband, Joseph Martin Handlan III, a well respected lawyer. Nancy and Joe combined her three children and his five children to create a blended family. After Joe’s retirement from being a judge they relocated to Wilmington, NC in 1990.

Along with being an exceptional artist; Nancy was a skilled pianist, exceptional game player, avid mini golfer, curious traveler, and experienced trout fisherwoman. She had a spunk and zeal for life unmatched by most.

A Memorial Service will be held at 2 pm on Saturday, September 8th at St. John’s Episcopal Church, 1219 Forest Hills Dr., Wilmington, NC 28403. Her final resting place will be in Kansas City, Mo at her childhood church.

Special thanks and gratitude to the staff at The Davis Community – Haven House who became a second family not only to Nancy, but also to her immediate family. In lieu of flowers: memorials can be made in Nancy’s name to the Wilmington Art Association, P.O. Box 3033, Azalea Station, Wilmington, NC 28406.