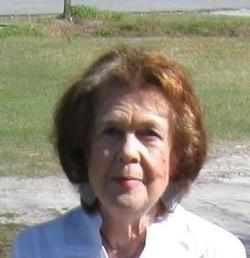 She was born Sept.4, 1943 in Anniston, Alabama to the late Harold and Adreene Wainscott.

She is preceded in death by her husband of 41 years Charles W. Shannon 2007.

Netta was a wife, a mother, a grandmother and a servant of God. She had a smile that could light up the room. Her willingness to put others before herself was just one of many qualities she possessed. She enjoyed writing as well as serving in her church. She was secretary for First Baptist Church of Leland for 25 yrs, until Dec. 2014. She will be deeply missed.

She is survived by a brother Ron, two children, Kimberli Williams and husband Kevin of Leland and Keith Shannon of Leland.
She was preceded in death by one child Timothy Shannon 2013.
She has 9 grandchildren, Hunter Williams, Jessica Williams, Trevor Shannon, Danielle Shannon, Garrett Shannon, Seth Shannon, Althea Ahlers, and Kelsi Williams James.

She is preceded in death by one grandchild Timothy “Dylan” Shannon 2010.

“To fair a flower to linger here,
To greater blessing given,
An Angel called her from her care,
And called her home to heaven,
The golden gates were opened,
A gentle voice said “come”
And with a sweet farewell spoken,
Netta calmly entered home.
Heaven gained another Angel.”

The family will receive friends at 4pm on Sunday, July 26, 2015, at First Baptist Church of Leland.

Funeral services will be following visitation at 5:30pm with Pastor Chris Hall officiating.