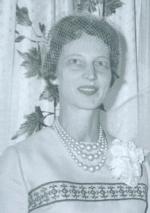 Nondas was born 1918 in Joplin, Mo. and attended Joplin High School where she was a member of the National Honor Society and graduated 5th in class of 336 in 1935. She graduated from Chillicothe Business in 1936. She was employed in Joplin at the Junge Baking Company and the Joplin Chamber of Commerce prior to moving to Lafayette, Indiana in 1949.

She was preceded in death by her parents, George and Hazel McDaniel, and her first husband, Armand L. Helm. She married George J. Daigger in Lafayette in 1960.

She worked at GTE in Lafayette until 1956 at which point they moved their regional office to Ft. Wayne, IN. She then started her fantastic career with Purdue University in 1956. She rose through the years to Administrative Assistant to the Vice President and Treasurer of Purdue, retiring in 1983 after 27 years there.

Nondas was a 59 year member of Central Presbyterian Church in Lafayette, a former deacon, and an Honorary Life Membership in NPW, Presbyterian Church, USA. As a member and Past President of the Lafayette Business and Professional Women’s Club, she was awarded “Woman of the Year” in 1965. She was a member and past board member of: St. Elizabeth Hospital Auxiliary, YWCA,General de Lafayette Chapter,National Society Daughters of the American Revolution(DAR), Home Hospital Auxiliary, and National Society Colonial Dames.