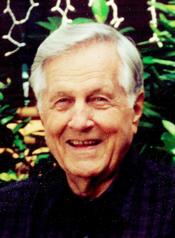 He is preceded in death by his wife of 66 years, Beverly Miller, and four brothers, Eldon, Vernon, Raymond and Leon Miller.

He grew up on the family farm in Lake Benton, Minnesota, where he and his brothers walked “three miles uphill in the snow‘ to the one-room school house. After three years of engineering study at the University of Minnesota, Orv enlisted in the Minnesota National Guard and was assigned to the California coast. After Pearl Harbor tragically occurred, he enlisted in the US Army. His first assignment was establishing anti-aircraft batteries around the San Francisco bay area. He also established an “off-duty base” at the Buena Vista Bar and Grill (famous for Irish Coffee). After Orv passed the exam for Officers Candidate School and with 3 months of training, he received his commission as a 2nd Lieutenant. As a Platoon Commander for the 513th Engineering Corps, he was stationed in Belfast, Ireland as the US and allies prepared for the Normandy invasion. During 4 years in Europe he earned 5 battle stars including the Ardennes, better known as the Battle of the Bulge. His platoon built Bailey Bridges to support the 3rd Army.

After the war was over, Orv headed back to San Francisco, where he met Beverly Haines. They were married December 8, 1946 and promptly headed back to frigid Minnesota where Orv completed a degree in Mechanical Engineering. After graduating, they moved back to sunny California, where Beverly was raised. He started his 27 year career with Shell Oil company as a research engineer. Assignments and promotions took Orv and Bev to New Orleans, Raleigh, Baltimore, St. Louis, New York City, and Chicago. Retirement brought them to Satellite Beach, Florida where they enjoyed boating, traveling and seeing their 9 grandchildren. They moved to Wilmington in 2003 to be near family.