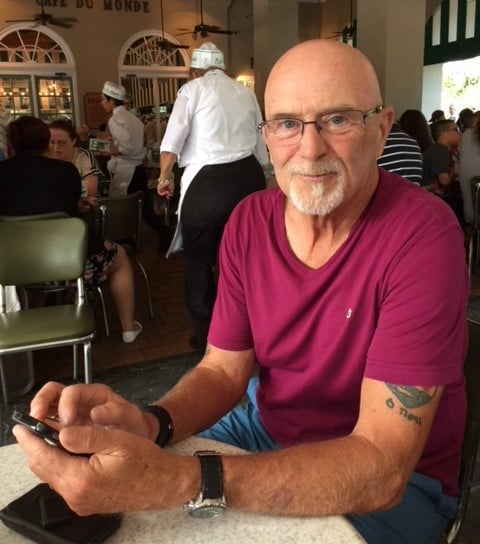 The strong and tender heart of Owen Roe O’Neill finally wound down and beat its last May 8, ending almost 72 years of a life filled with laughter, love, family and friendship. He died in the New Hanover Regional Medical Center in Wilmington, North Carolina, with his wife beside him.

“It’s the little things I will miss the most,” said his wife of almost 35 years, Shirley Mathews. “My toes curling around his as we fell asleep, catcalling at plot holes in British murder mysteries, seeing him watering his bonsai and using the trash cans as his potting shed as he trimmed and shaped his tiny trees, picking out which movie we would see every Saturday, watching his beloved Dodgers on TV, walking the dog and talking to our wonderful neighbors.”

He was born in Port Chester, New York, Aug, 28, 1946, to Elaine and Owen, Sr., the older of the two children they would eventually have.

“Owen was the best big brother in the world,” said his sister, Patricia O’Neill O’Neil (she married a one “l” O’Neil). “More than that, he was just the best man.”

He joined the Navy in the late ’60s and served in Philadelphia, Newport and in Da Nang, Vietnam.

He graduated from Sacred Heart University in Fairfield, Connecticut, and eventually went to work for the helicopter maker, Sikorsky Aircraft. At 55, after working 27 years, rising to Senior Purchasing Agent, he retired in 2001 from his desk job.

“When I put the key in the ignition and pulled out of the parking lot,” Owen used to say, laughing, “Sikorsky was in the rear view mirror, and I never looked back.”

Owen’s family moved to wealthy Greenwich, Connecticut, when he was a teenager, which was a culture shock for the boy who spent his first years in a housing project in  Port Chester. He would later say, “It was like moving from the outhouse to the penthouse.”

He flourished, however, and made many friends who he would have for the rest of his life.

In 1983 he met the woman who was to become his wife in a Norwalk, Connecticut, bar that featured a bucking machine and a techno band whose main feature was that it was loud.

“I saw him from across a crowded room, and we haven’t spent more than a few nights apart from that moment,” said Shirley, who was at the time the night city editor at the local daily newspaper.

The love of newspapers was something they had in common, and their first date was reading the Sunday papers in a pastry shop in Greenwich.

They spent 20 years in Stamford, Connecticut, before moving to Wilmington, North Carolina, in 2001.

Owen loved Wrightsville Beach and spent many sunny days walking for miles along the white powder sand, listening to the waves and sitting in his beach chair near Johnnie Mercer’s Pier and letting the sun fall on his face. It was his favorite place.

Next to Tod’s Point in Greenwich, Connecticut.

When looking back on the happiest times of his life, Owen always recalled the walks he would take with his beloved uncle, Allan Mascaro. They would head out in the dead of winter, walk a few miles along the ocean, and Owen would come back with ice in his hair and his beard.

He also aided and abetted his uncle sneaking candy bars, so his aunt, Alice “Dink” Mascaro, wouldn’t know. But, she always did.

Dink and Allan were like a second set of parents to him growing up, Owen always used to say. They were always there when he needed someone to talk to, and he loved them with all his great heart.

He was proud of his Irish heritage, and, in his 60s had the Irish harp tattooed on his right arm and the battle flag of the O’Neill clan (a severed hand over water) on his left.

He took up bonsai after his wife bought him his first tree in 2007. From that first tree, he accumulated more than 100, and even took up pottery in 2016, so he could make his own pots.

“He filled the house – and our marriage – with life and beauty,” said Shirley. “He was a sculptor, and his medium was a living plant.”

A memorial will be held at a later date. Any tributes should be in the form of donations to The Cape Fear Bonsai Society (his local bonsai club), The New Hanover County Arboretum or the United States National Arboretum.