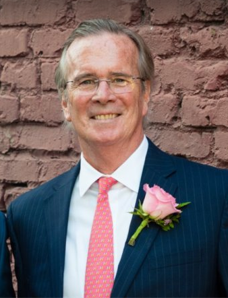 Patrick (Pat, Paddy) Roach, 63, of Leland, NC passed unexpectedly on January 22,  2022. We are devastated by this sudden loss and will miss him dearly.

Born on May 17, 1958, to loving parents David Joseph Roach III and Betty Roach, he is survived by his wife of 38 years Nancy, his daughters Katelyn (Nick), Christine (Brad), son Kyle (Maggie), and his granddaughter Kiley. He is also survived by his mother Betty, his brothers and sisters David (Valerie), Mary (Steve), Linda (Marc), and John (Maureen), along with his many nieces, nephews, and friends.

Patrick spent most of his life in Huntington, NY, where he met Nancy while working at Whaler’s Inn. He graduated from Holy Family High School in ’76 and went on to pursue a Bachelor’s Degree at Niagara University. Shortly after graduating, Patrick and Nancy were engaged before he started his 27-year career on Wall Street. Patrick and Nancy married in May of ’83 at St. Francis of Assisi in Greenlawn. In ’87 they welcomed their first child, Katelyn, followed by Christine in ’89 and Kyle in ’94.

Patrick was a devoted family man. He and his family spent the majority of weekends in the 90s and early 2000s at their ski house in Windham, NY. He enjoyed watching his kids play soccer and baseball on the weekends, never missing a game. He loved to play golf, deep sea fish with his brothers- in-law, work on home improvement projects with his sons-in-law, and spend hours in the kitchen. He was very much a chef at heart — anyone who has had any of his trademark dishes such as the famous “Purple Chicken” can attest. He was a gifted story teller and avid historian.

His quarter century professional career saw many achievements across many firms and institutions such as RMJ Securities, Instinet and Cantor Fitzgerald e-Speed. In 1993 he was named youngest Managing Director of RMJ Securities, a firm at which he was a pivotal figure for over 18 years. He remained close with many of his professional colleagues well into his retirement and throughout the remainder of his life. He retired in 2005 and centered his focus again on his family. There are many things in his life that he could tell you he was proud of professionally, but nothing was of greater value than all members of his family, immediate and extended. He and Nancy moved to Leland in 2018 to spend their retired years in North Carolina trying to make ‘y’all’ part of their everyday vocabulary. They often traveled around the country to visit their children and granddaughter Kiley.

He was a repeat volunteer at the Empire State Games for the Physically Challenged where he assisted in all elements of preperation and athletic competition for the athletes. He was dedicated to charitable military and patriotic causes and was a proud American. His dedication knew no bounds.

We like to think he’s spending his days now on a beach in Bermuda with his four-legged best friend, Yankee, glass of pinot grigio in hand.

Visitation for family and friends will be from 11am to 1 pm on Friday, January 28, 2022 at Wilmington Funeral Chapel.

In lieu of flowers, please send donations to the Tunnel to Towers Foundation or The Honor Flight Network.