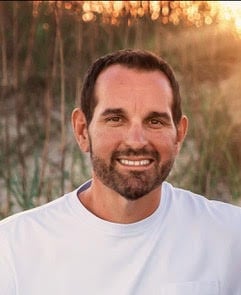 Patrick “Ryan” Jones, 43, of Wilmington, NC left this world too soon on July 17, 2022, after an eleven month battle with pancreatic cancer. Ryan was born on June 21, 1979, in Burgaw, NC. Ryan is survived by his wife of 12 years, Amanda, and his sons Corbin and Bennett, whom he loved deeply.  He is also survived by parents Furney and Becky Jones, siblings Bryan (Jenny) Jones, Traci (Chad) Kelly, Rebecca (Trey Moore) Jones, niece Olivia Jones, and nephew Harris Jones. Ryan also leaves behind in-laws Tammy (CE) Parker, Riley (Stephen) Pate, Ellis (Makayla Price) Parker, nephew Eli, extended family members, and many friends.  He is preceded in death by his grandparents Lloyd and Hazel Pope of Magnolia, NC and F.A. and Catherine Jones of Wallace, NC.

Ryan grew up in Wallace, NC where he attended and graduated from Wallace-Rose Hill.  He then moved to Greenville, NC to attend ECU where he obtained a Bachelors Degree in Urban Planning.  After he graduated, he moved back to Surf City for a short period before deciding move back to Wilmington and begin a career in the car business.  Ryan worked throughout his battle with cancer, up until the week prior to his passing.  He worked with his best friend Trey, among many other close friends, which he enjoyed immensely.

Ryan leaves a huge hole in the hearts of his family and friends.  He was a devoted husband, an amazing father, and a loyal friend.  Ryan and Amanda had a relationship that was based on mutual support, a deep love for each other, and love for their boys.  Corbin and Bennett were the pride and joy of Ryan’s life.  He was a very active parent, involved in all the kids’ activities, school functions and always made sure they were having fun. Ryan was the kind person who loved to spend time with family and friends and “never knew a stranger.”  Ryan enjoyed spending time on the boat where he could fish, anchor up to an island, or pull the boys behind the boat.  He also enjoyed “piddling” in his building, cooking, and watching TV.

A Celebration of Life will be held on Monday, July 25 at The Sailfish Restaurant at Marsh Creek Marina, from 3pm-5pm.  In lieu of flowers, please consider making a contribution to The Ryan Jones’ Family  GoFundMe.